Don’t Complain, Create Something Instead 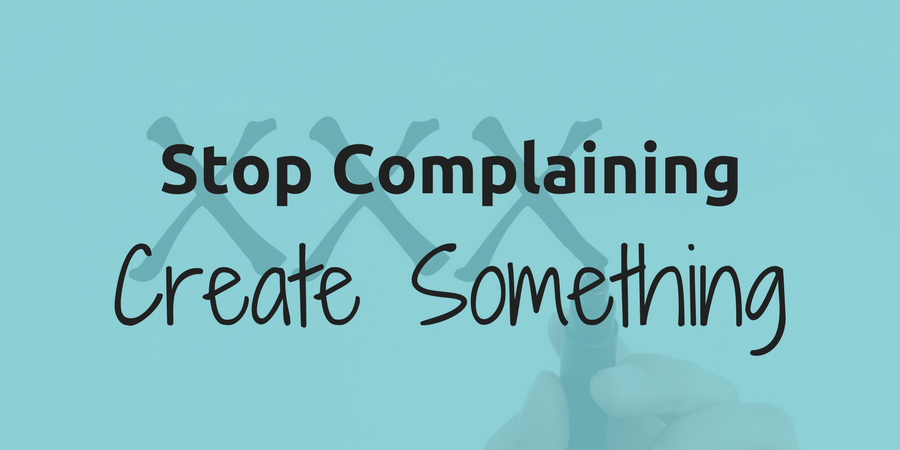 I spend a lot of time on Twitter, probably too much, indulging in my love of people-watching. Basically, I’m a lurker. And lately. I’m watching people who I know have platforms criticizing things they don’t like over and over again.  Sometimes we can’t change a situation until enough of us talk about why it’s a problem. (Fuck, sometimes even then we’re stuck with it – I’m looking at you Twitter. All we want is an edit button!)

Other times it’s much easier to bitch than it is to do the work. It’s this that drives me to distraction.

Because the people who complain already have a platform. When you say, “Websites shouldn’t use this language” or “I hate seeing these terms used,” you have every right to voice your opinion. But you raise a question (in my mind):

Why aren’t you using your platform – blogging, video, or audio – to show us a better way?

“Be the change that you wish to see in the world.” ~Mahatma Ghandi

Speaking Up May Scare You

Pardon me for relying on so many other people’s words, but sometimes a well placed quote says it better than I can.

“It is not the critic who counts; not the man who points out how the strong man stumbles, or where the doer of deeds could have done them better. The credit belongs to the man who is actually in the arena, whose face is marred by dust and sweat and blood; who strives valiantly; who errs, who comes short again and again, because there is no effort without error and shortcoming; but who does actually strive to do the deeds; who knows great enthusiasms, the great devotions; who spends himself in a worthy cause; who at the best knows in the end the triumph of high achievement, and who at the worst, if he fails, at least fails while daring greatly, so that his place shall never be with those cold and timid souls who neither know victory nor defeat.” ~Theodore Roosevelt

Over the past few weeks, I’ve heard writers, speakers, and influential people quote Roosevelt. I think the Universe might be trying to tell me something. And I’m listening.

It can be terrifying to put your views out into the world. Internet hate is ubiquitous. Critics are a dime a dozen. Opinions are like assholes. We all know that the moment we hit publish, we open ourselves up to criticism and complaints.

Teddy Roosevelt’s quote is the one I think of now anytime I decide to put my views out into the world. It’s easy to criticize, moan, and complain. Far harder is it to put yourself out in the arena. But if you remember that the critic from the sidelines (who’s only purpose is to bring you down) won’t, can’t, or isn’t doing what you do, you put that mean voice in their rightful place – on the sideline.

Yes, it’s easier said than done. So far, I’ve had to repeat this to myself over and over again, and sometimes I still get weighed down in what other people think. I’m a work in progress and so are you.

We all have our own reasons why we can’t do something — lack of time, lack of energy, lack of willpower, lack of desire. But when I hear (or read) a sex writer complaining about the words we use or how sex is portrayed, I have one question. What will you do to change things for the better?

No, you won’t change the world with a single blog post. Of course not. And yes, the people perpetuating the myths and wrong-headed thinking often have bigger platforms. The job seems impossible, I get it.

What are we going to do about it? I try to be the change I want to see. Sharing my perspective. Busting myths. Embodying what I believe. No, I don’t always get it right but the point isn’t to be perfect but to fucking show up and to fucking try.

When you show up and show the world how to do it better, even only in your corner of the world, and only for one reader, you change the world for that reader. And when you are covered in the dust and grime (and maybe even ejaculate) of making the world a more sexually educated and sex positive place, you’re changing the world.

My point to this?