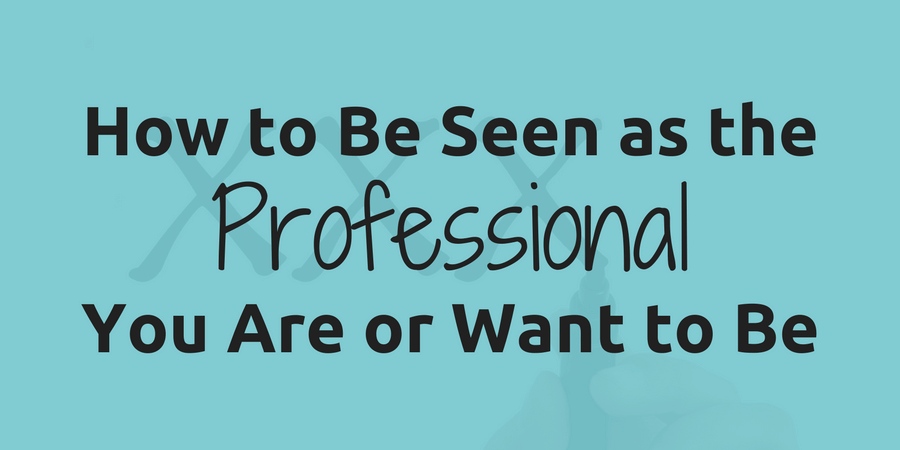 Certain activities and behaviors have to be learned, and some may need to be unlearned. There were some things that came naturally to me when I began freelancing, and others I had to learn the hard way (see “boundaries” below). Writers, especially, get a bad reputation for being unprofessional simply by not doing one or two of these things.

While none of us can ever be perfect, it’s better to try to be a professional and fall short than to think these things don’t matter. Even though I’m still a work in progress (aren’t we all?), this is what I do to be seen and treated as the professional I am.

I do not mean to fawn all over them, kiss their ass, or pretend to love them just to get the job. Nor do I think we should let a company or  representative make us feel bad, be judgmental, or talk down to us in order to get a job with them. But assuming a brand or company isn’t being an asshole to you, be polite.

It’s better to let someone prove they’re awful than to think it of every company out there. Doing so colors how you talk to and about them. If I’m working with a company and find a problem, I’ll give them the respect of a private email to address it because I also…

Respect is a give and take kind of thing. You have to be the bigger person and offer respect before you know you’ll receive it. But at the same time, you should absolutely expect a company or brand to respect your time, energy, work, and (more on this in a moment) boundaries.

A company that caters to sexual products or an audience trying to have good sex shouldn’t judge you because you put your boobs or penis on the internet. They can choose not to work with you, but a professional company won’t shame you in the process. They also shouldn’t expect that you’ll work for free. Any company that wants the use of your labor and content that will benefit their brand needs to pay for it.

Do What You Say You’ll Do

The moment you make an agreement to work with someone or provide a service, it’s time to honor that agreement. Just as you expect to be paid on time or receive product from a company, they expect to get what they’re paying for. Did you guarantee a certain amount of mentions on social media or a specific number of sponsored posts? Get it done.

The best rule to follow is this: under promise and over deliver. When we’re eager to get the job or build the relationship, over promising seems like the thing to do – because you want them to like you and hire you. But if you can’t deliver, or you nearly wreck yourself getting it done, you’re only hurting yourself.

Freelance writers are notorious for missing deadlines. I can honestly say in nearly four years, I’ve missed two deadlines and one was due to illness and the other wasn’t missed because they didn’t give me one. (Apparently, the due date was in their head, but not in an email to me. Lesson learned – no more squishy deadlines of “When you can.”)

This goes back to doing what you’ll say you’ll do. The quickest way to appear unprofessional and lose money is to continuously miss a deadline. Why would a company keep working with you when they don’t know when they’ll get work from you? They won’t. Better to request extra time before the deadline arrives than to act like it was never there or you forgot about it.

Reach Out with Concerns

Call out culture isn’t my thing. Sometimes it works well. A bad thing is found, pointed out, and corrected. The company apologizes and we move on. But more often than not, it’s a complex topic that requires more than 280 characters, and people form opinions without knowing the entire story. It’s a pile-on and sometimes a small business is left feeling beat up and thinking the entire sex blogging community hates them — which is never true.

As a professional, if I have a problem with a company – one I’m working with or want to work with – I’ll reach out directly. Did they see that poorly worded tweet? Do they understand why some terms aren’t inclusive? Were they aware of this or that issue? They don’t have to respond but the company I can respect will, and we’ll have a conversation. Maybe they’ll fix it, maybe they’ll won’t – and what happens then is another discussion.

Is there a time and place to say something publicly? I’m sure there is – it goes against my entire personality to do it, so it’s rare for me. But as a professional, I’m going to reach out first. Not every company is evil and not everyone needs to be shamed into good behavior. And by offering my opinion in a professional way, I’m also in a better position to offer my services to reduce the chance of it happening again.

Here we are at the thing I keep mentioning, because I’m so damn bad at it. A professional sets boundaries. Everything I’ve ever read about freelancing in the online world said it was true, and for a couple of years, I ignored it. Want a piece Saturday (and you’re asking on a Friday)? Done! Send an email and expect an answer within five minutes? Done!

These days? I’m over that shit. I never tell someone no, instead I tell them what I can and will do. New clients ready to start a project will ask how quickly I can begin – it’s almost never right away. My schedule doesn’t work like that. So I tell them when I’ll begin and what they can expect in the meantime. When a company asks if I’m available, I only say yes if I’m truly available.

Example: A client asked me on Thursday if I was available for a quick screen share call on Friday. He means it when he says quick but my day was packed, and I was behind schedule for the week. I could make myself do it but I would hurt other parts of my day in the process. “Not available on Friday but here’s when we can chat on Monday” and I gave him the schedule. Because he’s also a professional, he was fine with it.

Get the Information You Need

Some brands and companies have hired freelancers in the past and know exactly what they want. A few have read all the right resources and have an idea of what they want. Either of these types of clients will give you most of the information you need. No one is perfect so some stuff gets forgotten. And some information is specific to your needs or the project – as the professional, it’s expected you’ll know what information you need and that you’ll ask for it.

But not all brands are like that. Some clients reach out knowing they want a writer but they’ve never hired a freelancer. Or they have an idea of what they want but none of the details. As a professional, it’s your job to get the information you need to do the work. Do not be shy about asking questions. You’re not being a bother or a pest. You’re a badass smutlancing professional and if they want your amazing work, they’ll have to help you help them.

And they will. Even if you have to guide them a little so that you get what you need to do the job.

Think of the Future

Some bridges need to be burned, never to be crossed again (my ex husband comes to mind). But in the world of sex, creative work, and smutlancing, it’s a much smaller universe than you realize. When you burn a bridge by telling someone off (without provocation), ignoring deadlines, or not doing what you said you would, word gets around.

The brands you want to work with won’t want to work with you. Your pool of opportunities will shrink so that new opportunities and better pay are harder to come by. You may never be told why work is drying up, you’ll just feel it happening. Always be yourself, whatever that means, but think of the future and how a specific interaction could hurt you…or help you.

I would never tell you to be bland and boring or do anything to make people like you. Setting boundaries and saying no means you’ll come across someone who doesn’t like you for it. Although it’s rarer than you think. The people who hire me know who and what they’re getting…a professional who gets her work done while being honest and straightforward. You don’t have to stop being yourself in order to be a professional – just become the best version of yourself and do your best work.