An Alternative to Calling Out an Adult Company 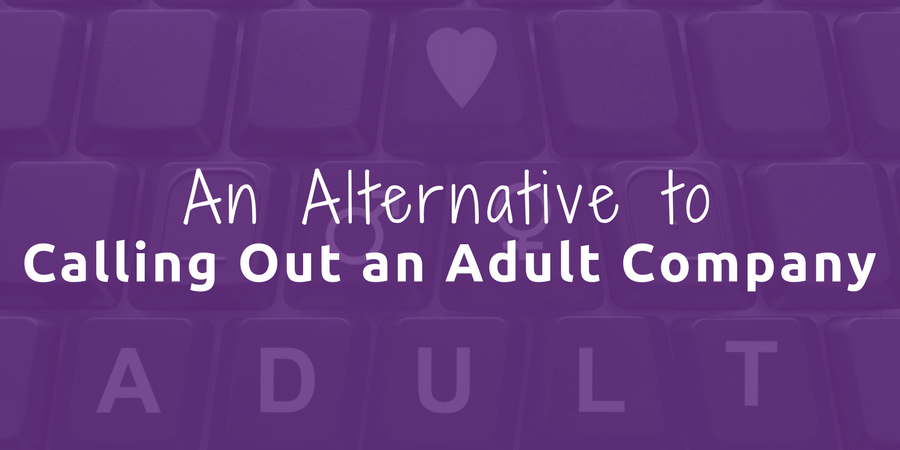 I’ve said before that call-out culture (on any social media platform) isn’t my thing. My personality isn’t built for it, and from observation, it doesn’t work most of the time. Typically, several people yell (in all caps), feelings get hurt and tempers flare on both sides, and there is no dialogue. People dig their heels in because they think they’re right and/or they feel persecuted.

Sides are taken, lines are drawn, and both sides go back to what they were doing in a few days but now with hard feelings and little willingness to work together or build an understanding between each other.

Look, everyone gets to handle things in their own way. You do you. But from my perspective, if calling out a company isn’t something you’re comfortable with, there is an alternative. Especially if you’re like me and have zero interest in arguing, 280 characters at a time.

Consider the Size of the Company

Big adult companies with big budgets should be able to hire the best people who might not know everything about sex but can find good people to help them. Small companies? They might be two or three people, if that, on tight budgets, DIY-ing the hell out of their online marketing. They’re often on a shoestring budget and can’t afford to hire a social media manager. They’re prone to make mistakes like anyone else. The good thing, though, is that smaller companies are often the most approachable.

Am I more forgiving of small companies? Yes, most of the time. They’re not sex bloggers and don’t always know what we know (and let’s be real, we don’t know it all either). They’re simply trying to help customers and sell a thing they love. Just like we have reasons why we sex blog, they have very passionate reasons for running their business.

As a smutlancer, I consider myself a small business, so I sympathize with other small businesses. We’re all just imperfect people trying to follow our passions. So yes, I think about the size of the company and the limited resources they’re likely working with. It’s not a free pass for bad behavior but it means I’m more forgiving of fixable mistakes.

Reach Out In Private

If you see something problematic, and you will because it happens, the time it takes to blast someone publicly is the same amount of time it takes to private message and say, “Hey, I saw this, and I think there are problems with it.” In most cases, you’ll get a response with questions and possibly pushback (no one likes to hear they might be wrong). But at least you’ve started a conversation.

As long as both sides stay respectful, you can explain what you think the problem is and offer suggestions on how it could be done better. Approach the company (and the person) with a sense of generosity and helpfulness, instead of wanting to take them down a peg or two. People can tell the difference, and they’ll respond accordingly.

It’s possible you’ll reach out and get no response. They might ignore you or shrug you off. While I might not call anyone out even then, I can see the argument for why now would be the time to say something publicly. If you’ve tried to keep it professional and been ignored while the bad behavior persists, sometimes public shame is all you have left. But I don’t think it should be the first step.

Understand We Have Influence…But It’s Limited

Some sex companies care very much what sex bloggers think. And some care very little. All good companies want to do good work. They might not always know how, but the absolute best companies are willing to try. Sex bloggers can help with that — we know we can because we do it all the time.

But if a company has made a name for itself and is profitable without the help of sex bloggers (yes, those companies exist), yelling at them means they have zero incentive to work with any of us in the future. Once a person, brand, or company feels attacked, any positive influence we’ve got is lost. And other companies are watching and judging for themselves if they want to work with us, too.

Some adult companies desperately need us and just don’t know it. Their content is poorly written. The blog posts they share could be better researched or more inclusive. If what we want is to create real change, approaching them with the intent to influence and help, not to start a social media war, is always more productive.

You May Have to Agree to Disagree

You can reach out privately or call someone out, but at the end of the day, you may just have to agree to disagree. Not every company is meant to have you (or your audience) in their following. We’re not all meant to agree with each other.

Realize, though, that other people (bloggers included) won’t always agree with you, either. They might not find the same things problematic. This doesn’t make those people your enemy, either. We get to have differing opinions, and we get to have different experiences with a company.

If an adult company is doing bad things, behaving unethically, or simply “not getting it” — from your perspective — use your influence to talk about it. Record a podcast or video, write a blog post, and influence your own audience not to buy from that company until they do better.

Ultimately, not liking a company or their business practices is a fact of life. We aren’t all going to agree and some companies who have shitty content or behave unethically will continue to exist. Instead of tearing a company down, build the good companies up.

Help them grow and prosper. Use your influence in a positive way, and when in doubt, approach them with empathy and a willingness to engage. You might be the reason they improve and change their ways. If you show an adult company a genuine desire to help, when they can afford to hire someone, you might be the one they ask.