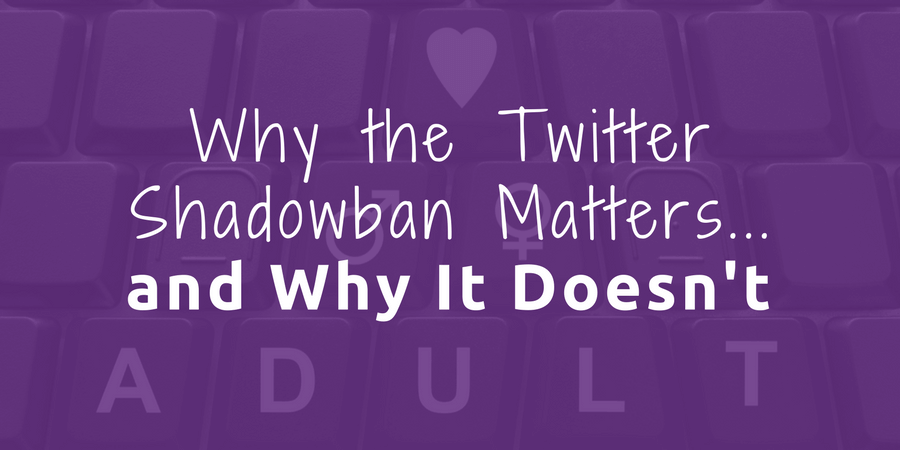 The social media and content entities of the world work hard these days to lock out adult content. Either due to investor concerns about all that dirty, dirty sex littering their cash cow. Or it’s in an unconvincing attempt to “Think of the children!”

WordPress, Tumblr, Facebook, Instagram, Patreon, and even the place many of us once thought safe for sex, Twitter, have crumbled and fallen to censorship and pretending sex is for “other people” instead of every (legal adult) fucking body on the planet.

Here’s why the shadowban matters and why it doesn’t.

Chat with me on Twitter about the shadowban and you might consider me very calm about the whole thing. To a certain extent I am (more on that later), but I’m well aware of the problems with the practice.

Okay, it’s not very eloquent, but that’s as simple as it gets. Shadowbanning – a Twitter block that doesn’t allow a user to come up in search, be seen by non-followers, or show up when using any hashtag – blocks our ability to express ourselves. A larger entity has decreed that we post things that are unseemly, obscene, spam, unwelcome, unliked, and unwanted – and we should go hide in a corner because of it. Our voices are stifled.

So yeah, censorship sucks and so does a shadowban.

What gets you censored? No one is completely sure. The reasons vary from explicit content to auto-sharing your content too much to including too many links in your tweets.

The Rules are Applied Arbitrarily

A lot of sex bloggers spend a lot of time trying to play by Twitter’s “rules” to avoid being shadowbanned. They don’t post nipples or cunts or cocks. They stop auto-posting from their website or any other social media tool. A lot of time is spent figuring out why they’ve been shadowbanned, and it’s a waste.

Because the rules aren’t known – Twitter won’t even admit they shadowban anyone. And what seems to get one person shadowbanned doesn’t touch another user. The bans are lowered and lifted with no real pattern and zero communication. You won’t know what you’re in the corner for, how long you’ll be there, and what you can do to do fix it.

We Have No Real Recourse

I might be a kinky submissive woman but damn if I like having all my control taken away. Because the rules and application are so arbitrary – and likely rely on reporting which can be arbitrary as well – there’s no way of knowing how to avoid a shadowban. There’s also no higher authority to really talk to or get information from.

Once put in a corner, you’re stuck there until the Twitter deities decide to let you out. You can’t be seen, interact with new people, or grow an audience — and there’s not a damn thing you can do to get yourself out of the shadowban.

Shadowbans are another way to silence and control content that others find “inappropriate” but because it’s Twitter’s sandbox, there’s very little we can do about it.

Okay, I can’t give you a Pollyanna version of a world where a Twitter shadowban doesn’t have negative outcomes. It curtails sharing and learning. As a creator, your ability to build a Twitter audience is stunted and slowed to an absolute crawl. For the rule-followers out there, breaking rules can be akin to committing a crime (says the rule-follower). But, in some ways, a Twitter shadowban matters very damn little.

Trying to “play by the rules” to avoid a shadowban is an exercise in futility. It’s arbitrary enforcement and unknown set of rules make it impossible. Spending all your energy changing your content to make them happy will only make you miserable.

You might get it right one time, but before you know it, they’ll change the rules again. If you’re spending your time chasing Twitter’s tail and trying to make them happy, you’re not creating interesting and good content. All you’ve got to show for it is more frustration, less content you love, and another shadowban.

Don’t try to beat Twitter. Just do your own damn thing.

There are Better Ways to Grow Your Audience

Yes, Twitter can be a quick and easy way to get eyeballs on your content. Sometimes. If you can cut through the noise, and if you work Twitter hard. Which means it can also be a time-suck. Your real path to long-term growth on your website, no matter what kind of sexual content you create, is both simple and difficult.

Keep making your thing. The more you publish content to your blog, in whatever form it takes, the more opportunities you have to connect with someone.

And if you learn a few SEO tricks and publish unique, interesting, and good content on a consistent basis, you’ll attract people through search. At the same time, when you keep making your thing, writing your stuff, and publishing, you give people more ways to share you with their own circle of friends. Yes, it takes longer than a few quick hits from social media, but this kind of audience lasts longer too.

You Should Do Your Own Thing Anyway

I have no idea if I’ve been shadowbanned although I suspect it’s happened. For several months, I added one or two Twitter followers a week, if that. I didn’t get a lot of engagement with my tweets, either. I kept publishing the same content I always did and (sometimes) the same filthy NSFW tweets and including links all over the place. (You know, all the things that might have gotten me shadowbanned in the first place.)

Then one day, it changed. People began to follow me left and right. My tweets were getting attention. The clicks from Twitter to my website tripled. If I’d been shadowbanned, I guess it was over.

I’ve made concessions on Facebook and Instagram about the images I publish. A lot of concessions. Because they don’t shadowban you, they shut you down. On Twitter, I don’t worry about it. Why? Because even during the times my Twitter action was slow, my blog grew – and so did my blog subscribers. And I’m spending my time doing what I love – creating content.

We can’t beat them at this – not as the creators. Only an audience demanding that Twitter give them their content back can win. So while we need to raise the topic, make our audiences aware, and shed light on it, we won’t fix this. A pissed off user who can’t get the content they want – and will admit they want kinky, sexy, dirty stuff – might. Eventually. If Twitter cares enough.

Oh, and before you panic about being shadowbanned, make sure you’re not a victim of “safe search” on Twitter instead.