What Would You Do If Social Media Disappeared Tomorrow? 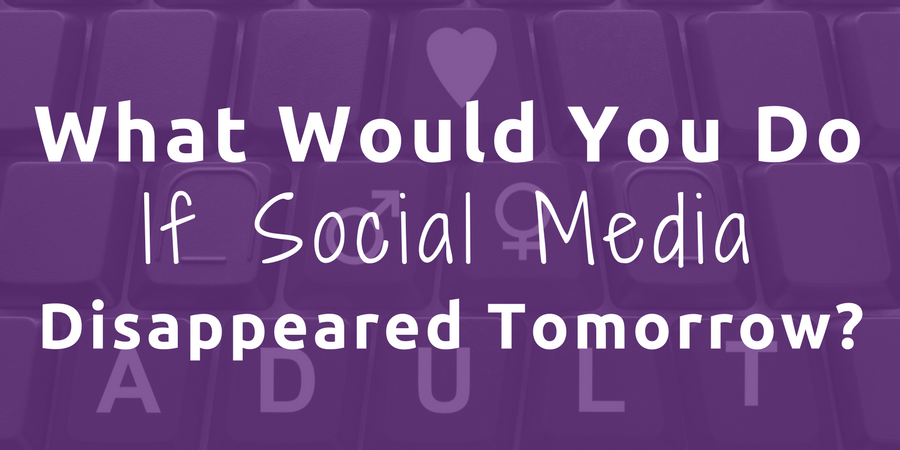 Debates rage on social media, as they do, all the time. Some I ignore. But some make me think. Sometimes I think, “Can’t we all just get along?” And then sometimes I realize I have Something To Say.

Lately, it’s been about voices and platforms and where sex bloggers are most effective or maybe even where they should be.

To be fair, I was a blogger long before I ever created a social media account. To me, Facebook was where I talked to my vanilla world about my vanilla life. Eventually I signed up for kinky social media accounts as Kayla Lords but I barely used them for the first couple of years. I didn’t understand Twitter or have time for Pinterest, and Facebook was just another way to talk to people, except now they were sex and kink people.

Until I got kicked off Kayla Lords Facebook profile. That was the day I knew I could never count on social media. If I’d depended solely on that profile to communicate with people, where would that have left me? How would I talk to anyone and reach the people I want to reach?

My Platform to Speak is My Blog

For me, my platform was, has been and will continue to be my blog. As long as I pay for my hosting, it’s my space. And in that space I have enough room to say whatever I need to say. No character limits and noticeably fewer arguments with strangers. It was, and continues to be, a place where people can come or go, depending on whether they agree with my point of view or not.

Unlike social media where it’s like we’re all trapped on an elevator together. There, the only way to ignore someone is to block them.

In blogging, if someone doesn’t like your views or opinions, they (usually) go away. On social? Unless one of you takes active measures, you’ll likely bump into each other over and over again. Worse, they might have their friends gang up on you.

And, frankly, can you really be a sex blogger if you don’t…ya know, blog? Yes, posting on social media is a form of microblogging and a valid way to communicate, but….is that really what we mean by the term “blogger?”

Social Media is a Tool

Now, that being said, having a voice on social media can be valuable. You reach people who didn’t know you existed. You can engage in conversations outside of your blog. For some of us, social media is the easiest way to talk to friends across the world. It’s got real value on a personal and professional level.

It’s a fucking fabulous tool, and I get very cranky when the rules change to censor anything sexual. But I also have to ask myself, “What will I do if this stops working?”

When you’re a blogger or, at the very least, a person with something to say and a desire to share it, spending all your time on social media is a bit dangerous…

And, the part I think gets forgotten most, you’re playing in someone else’s sandbox. They can uninvite you at any time. Social media can kick us out on a whim – and they often do. Technically, they don’t have to explain themselves at all.

What Would You Do if Social Media Disappeared?

Pick a social media platform, any of them, all of them. What happens to your voice without social media? How do you share your beliefs and perspective with a wider world?

If we’re being honest with ourselves, we know blogging – video, audio, or text – is both the easiest and most difficult way to do it. Easy because it’s our space and our voice. Difficult because it requires time, effort, and patience. So much fucking patience.

It’s not exactly a big leap to imagine getting shut out of these places completely.

I cannot and will not depend on social media completely. And I won’t ignore my own space – bought and paid for by me – as a way to share what I think, in a way that suits me, that is also more searchable and findable.

It’s a reality that using free tools we don’t control means we’re there at the whims of the creator. As a sex blogger or creator of any content that wants to make a living at it, you have to ask yourself a few things…

What will I do if social media goes away forever?

Have I or am I spending enough time growing my blog?

What is it I’m actually trying to accomplish and where’s the best use of my time spent doing that?

Truly there is no right answer. I have no doubt there are people able to make lucrative careers for themselves on the back of their social media following, but the question remains…what will they do if that platform disappears?