Patreon Turns Against NSFW in a Big Way 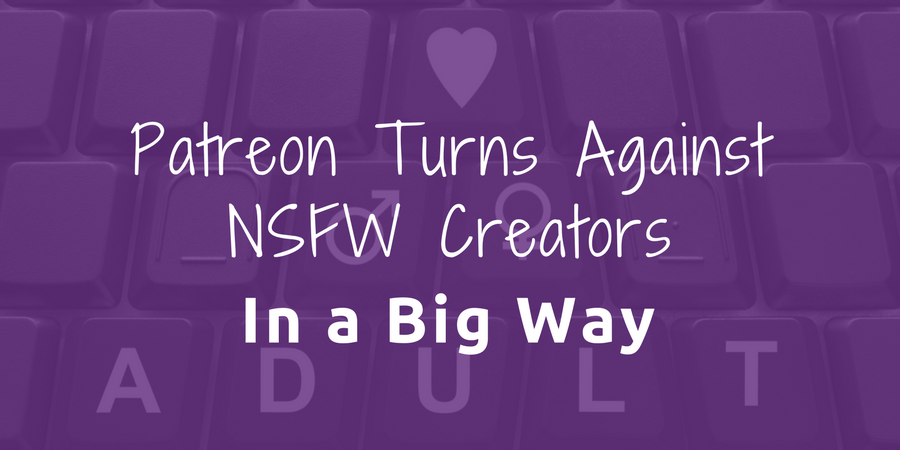 My plan had been to add Patreon to the ongoing “How to Make Money” series as a viable option for most sex writers and creators to build an income from your work. I’ve used and loved Patreon for a long time, and although I disliked their stance on not allowing NSFW creators to show up on search, at least they gave us a space to earn money doing what we love. When PayPal threatened to shut them down for working with us in 2015, I received plenty of communication and what felt like genuine empathy from Patreon. Now…things have changed.

Patreon has gone the route of many other mainstream companies and changed the rules. Once a paragon of (mostly) sex-friendliness, they’ve quietly and, what feels like secretly, changed the terms of service to effectively ban many long-time NSFW creators.

From their TOS Guidelines:

I self-hosted my websites after a WordPress purge of multiple sex blogs. I’ve been rejected by Facebook ads many times simply because of my content (but they’ll take Russian money). To become an Amazon Affiliate, I have to ignore my largest audience on one website because it’s been labeled “pornographic.” And don’t even think about using Twitter ads, Google AdSense, or any other mainstream options.

So no, I’m not convinced Patreon will stop here or that it won’t get around to impacting sex writers eventually.

Why Is This Happening?

Smarter bloggers and writers than I understand this better. Since they’re not the types to freak out and think the sky is falling, I’m paying attention. A lot of these conversations are happening on Twitter so go there and follow smart people.

Violet Blue wrote a story about the last dust-up Patreon had with NSFW accounts in 2015 when PayPal threatened to shut down the entire site. Why? Because Patreon allowed accounts about sex to accept dirty, dirty money and PayPal doesn’t want any part of it. She also pointed out in her piece how much of the excuses companies like PayPal give for why they won’t take money from NSFW/sex creators – in any form – are pure bullshit.

Bacchus on ErosBlog wrote about how this big change to Patreon is likely part of what he calls #pornocalypse. Why? Because Patreon raised outside funds with investors. And once outside money gets involved (regardless of the individuals own personal kinks and sexual preferences) they don’t want any NSFW getting on them.

Pandora/Blake, who will definitely be impacted by the change, wrote their thoughts on the topic. They sum it up quite nicely — it’s like a punch in the gut to creators, especially sex workers, who’ve worked hard to build an income and an audience.

Ultimately, it’s happening because it can and because money talks. As single creators or small businesses, we’re not always big enough for anyone to pay attention to. So PayPal, Patreon, and others can do what they like with impunity.

What Can You Do About It?

I don’t think there are easy solutions, but it goes back to the importance of having your own sandbox. WordPress, Blogger, Tumblr, PayPal, MailChimp, and countless others keep those of us who explore sexuality and eroticism in multiple ways out of their sandbox. And they can, because they get to make their own rules, and we haven’t banded together enough so they can’t ignore us.

To me, that’s probably what needs to change the most. We need to be so loud and so effective, we can’t be ignored.

Encourage your followers to share and like and speak out. It’s not just the NSFW creators that are being restricted – companies are restricting the buying power of everyday consumers. Sometimes we really can make a difference with our wallets. I don’t know if this is one of those times, but I’d love that to be true.

What I’m Going to Do About It

I don’t have a lot of good answers, but I can tell you what I’ve done and will continue to do…

Pay attention to smart people. I’ve linked to a few in this post. Always read the Terms of Service of any company or website you work with. And, keep creating your smutty stuff while supporting others, too. If we could come together as a bigger, louder, angrier group, maybe we could effect real change. We might all create content about sex in different ways, but none of us are immune to prudish attitudes.

Anyone got other ideas you’d like to share? Other sources you’re using for funds? Alternatives to Patreon that don’t get any attention? Share in the comments below!