What To Do When You Run Out of Writing Ideas 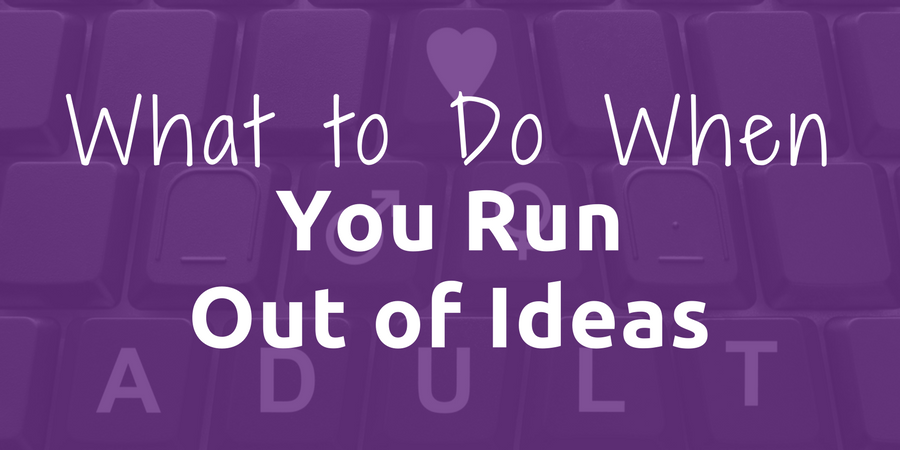 I’m going to admit something right here and now so everyone knows it. No holding back. No hiding the truth.

Sometimes I have don’t have a clue what I want to write about. I need to pitch publications so I can earn money, but I come up blank. Panic sets in. What if I never have another idea again? Have I used up all the ideas I can write about? Is this the end of my writing career?!?!

I might also be prone to catastrophic thinking. I admit that, too.

The point is that whether you’re at the beginning of your writing career or you’re a blogger who’s starting to wonder if you’ve written about everything already, we all run into problems finding a topic.

Is It Writer’s Block?

Depending on who you talk to, writer’s block exists or it doesn’t. I will never deny that sometimes the words just don’t flow. Do I think it’s some kind of plug (or block) that keeps things (words) from flowing? Not necessarily. Sometimes it’s our own anxieties. Very often it is. Sometimes it’s because we haven’t given ourselves time to think and feel creative. Maybe you’ve got family worries, money stress, and relationship problems that have crept into the part of your mind that lets the words flow. Calling it “writer’s block” or not is semantics. Sometimes the words flow from your fingertips and sometimes they don’t.

When the problem is figuring out what to write, it can seem worse. You can’t start until you have a topic. That’s what I’m focusing on here. When you feel like your ability to think of a topic has dried up, try these things…

Or go for a walk. Get on the treadmill. Read a book. The point is to do something that has nothing to do with the pitching and writing you’re not doing. For me, taking a shower and washing my hair leads to new ideas. Not all of them are great, but I don’t need them to be. I just need them to flow.

I’ve talked through my problems in the shower. Composed entire podcast episodes under the water. Practiced my session for Eroticon 2018 while rinsing. Not only was my mind clearer when I got done, I had a few things to jot down that I could use later. The point is that when I’m doing something mindless – something i can do without thinking and with my eyes closed – space in my head opens up. It allows light and air to come in, and with it, ideas.

This sounds weird, but stick with me here. Sonia Simone on Copyblogger published a podcast episode in early 2017 with tips to help writers create better headlines (so this isn’t my idea but hers). I suck at headlines so I was willing to try it, but I found a very pleasant side effect. When I was done, I had a list of 50 topic ideas – some awful, but some were great. Here’s how it works:

Look at Your Reject Pile

I don’t expect you to have a physical reject pile of ideas, but we all have those topics we think, “I can’t write about that.” When I hit a slump on my personal blog and felt like I had nothing sexy to say, I realized it was because I had other things to say but thought I shouldn’t. My “reject pile” was filled with topic ideas about mental health, anxiety, worry, stress. I told myself no one would care about it, so I shouldn’t do it.

When I realized that the things I “couldn’t” write about were taking up all my mental space, I decided to write them anyway. One blog post that your readers don’t click on won’t kill you. And if you’re like me, it might free space in your head to do more writing. What I quickly learned was that talking about the non-sexy topics was quickly embraced by my readers. Yes, they came for the sexy smut, but they cared about me as a person. As long as I was writing about something meaningful to me, they were willing to go on that journey too.

The panic that threatens to overwhelm when you need an idea and don’t have one is all too real. I get it. But the more you panic, the harder it is to think straight. It’s time to sit back and breathe. Shut down the laptop or computer. Walk away from it for a while. Unlike the “take a shower” thing, this is about taking a break completely. Sure, in that time, you might have an idea. If it happens, great! But the point isn’t to trick your brain.

When anxiety, fear, nervousness, and stress take over the creative process, we’re rarely at our best. Personally, some of my worst writing happens when I’m trying to write over the panicky noise in my head. A single day or even week with no writing isn’t the worst thing ever. As long as you’re not neglecting deadlines, it will be okay. Coming back more centered, calmer, and refreshed will make you a better writer in the long run.

I know the cycle you go through when the ideas won’t come: I have no ideas, and if I don’t have an idea, I can’t write a piece. Without something to write, I won’t [make money, grow my blog, get the client, make the sale]. It’s all going to go down in a fiery blaze if I don’t think of something! Actually, no, it won’t happen that way. Coming up blank happens to all of us from time to time. If you recognize that it’s normal and that you’re not alone, feeling empty doesn’t have to consume you. Be kind to yourself and remember all sex writers go through some version of this.

Have you found yourself “out” of writing ideas? Did you do anything special to get back in the groove? How long did it last? Share in the comments below!