Happy September, Everyone! I don’t know about you, but fall is one of my favorite seasons of the year. Besides pumpkin flavors being back in style and Halloween being around the corner, I see fall as a time of introspection and mindfulness.

Just as the leaves change colors and fall to the ground, I think about what I can change and what I need to release that’s no longer serving me. So, it’s no mistake that this month’s Smutlancer Spotlight will invite you to do the same, especially since we interviewed the dynamic and multifaceted: Caress Fitch (she/they).

Caress is a proud Black, Queer, Disabled, Non-Monogamous Leathergirl who advocates for the BIPOC (Black Indigenous People of Color), LGBTQ+, Poly, Kink, and Disabled communities in every aspect of her life and work. She has been coaching and consulting for 25 years, focusing on relationship coaching for the past five years.

She coaches through a diversity, equity, and inclusion lens, so she understands and respects that relationship dynamics can be different in BIPOC, LGBTQ+, kinky, and disabled communities. They are a principal coach and co-founder of Mindful Passions International. She is also a founding member and consultant at Wild Authentic Mindfulness: A Conscious Consulting Collective.

Since Caress intertwines diversity, equity, and inclusion in their smutlancer work, we talk about how race and gender relate to sexuality. If this subject makes you feel uncomfortable, we invite you to consider a different perspective by taking in what works for you and leaving what does not while still respecting a smutlancing journey that’s different from your own. We’re excited for you to read our interview. Enjoy! 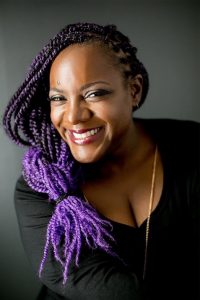 I am an intimacy and sexuality coach. I also blog and write articles on the topic [and] share [my work] on social media.

What topic and/or type of content do you get paid to create?

How long have you been a smutlancer?

Five years! Up until [2015], I kept all my kinkiness on the down low. [I’ve] had a slightly sheltered life. Although in the ’90s, I did very seriously consider doing 900 call work.

I’ve always been interested. I just didn’t know it was a thing I could do safely and legally until about five years ago.

That’s a hard question because the business is split evenly between work around sex and work around diversity, equity and inclusion. [Since] I’m a woman of color, the two are intrinsically tied for me. I can’t be about sex without being about diversity and inclusion. So, I would have to say full time, especially since I’ve been bringing more to my consulting work… about how the experience of sex is different for people of color.

Okay. Say more about that.

It’s different because of the societal expectations that have been placed on us. We’re more likely to be fetishized and possibly unable to notice that we’re being fetishized until a relationship becomes abusive. So, [I provide] some windows into that sort of behavior for [non BIPOCs] to be able to be aware [of] red flags that I, as a person of color, look for when I’m negotiating a new relationship, a new hook up, [a new] interaction, [or] whatever it’s going to be.

Are you open with anyone about the work that you do? Do you tell only close friends about it or are you public about your work?

I’m public about my work. The bio on my website says flat out that I’m pansexual, I’m polyamorous and I’m a leather girl. It doesn’t go into the details of what the rest of my business is about but the information is out there that I am about sex.

Do you work under a pseudonym?

No, I do not. I use my legal name except on my Medium publication. [Medium] uses my social media handle, which still uses my first name and the first part of my business name. So, on social media and Medium, I am @CaressMindful, but that doesn’t feel like a pseudonym.

When and how did you realize that this was what you wanted to do professionally?

It was a dream for a very long time. Sex has been a hobby of mine since I was a teenager. And because it is so enjoyable and brings so many people pleasure, why wouldn’t I do that as my full-time job? But at the time, the only ways that I knew of people making money at sex were prostitution and making pornography. And I didn’t really want to do either one of those things. So, as we’ve had increases in technology, I have privately done camgirl work but never through a site. I’ve played at phone sex just with long-distance partners, but it’s always been so fulfilling. And the idea of being able to do this full time never stopped. I even put a business plan together to have as a retirement running a brothel in Nevada. *laughs* That’s a plan I’ve been talking about for 20 years. *laughs*

*Laughs* That’s awesome! How did you get started in this field?

I got started when I was coaching someone about their sexual performance. It was a thing I was just doing for friends. It wasn’t a big deal to me [until my friend] said, “I really want to pay you for this! This is really valuable for me…” [So] that sent me down the path of [thinking], “What is a sex coach? What does all of this entail? Who does this kind of work?”

So, I spent about a year doing some research and another year talking myself into it saying, “Yes, I can do this.” Because there is nothing that I do in my life that I feel I need to hide. Before I could move forward with this, I needed to be comfortable and secure enough in myself to be open about doing this work and the fact that this is who I am. So, I did my research to figure out and spent another year leaning into myself, boosting my confidence, figuring out what do I need to feel safe and secure doing this work using my name [without] hiding. [Once] I got to that point, I started down the path towards some certifications. [I] wanted to be a holistic… coach, so I’m a master life coach as well as being on the road to being certified as an Erotic Blueprint Coach™.

How long before you felt like you had “made it”? By the definition YOU choose?

I don’t know if I will ever feel that I have made it. I don’t have a desire to be a household name. I don’t need to be the black Dr. Ruth or anything like that. I don’t need to have a radio show… One person has [already] told me, “Oh my gosh. You really helped me. I now no longer have this problem.” So, I’ve already made it by my standards of success. But by society’s standard of success, I’ll probably never make it because I’m a Black woman.

Can you speak more about when you mentioned: “Because I’m a Black woman”?

The way American society is structured, I just don’t have the same opportunities that a white woman of similar age, experience, and education would have. I just don’t. [It’s] structural racism at its worst.  I learned [that] with a 20+ career in information technology when I realized I had to be three times as good as any of the white people on the staff to be perceived as half as capable.

What’s one thing you wish you had known when you started creating content about sex or became a smutlancer?

I wish I had known that this was possible sooner. I also wish that back in the day, when my kids were really small, my ex-husband had a car. Because then he could’ve come and picked up the kids on the nights I had to be on the phone. *Laughs*

My mornings are spent on admin work and working on the business. So, creating content [and] nurturing my connections. My afternoons and evenings are spent working one on one with clients or working with groups and delivering content. I just facilitated a conversation talking about the difference between sex, gender and sexuality for a group of cis-women that did not have that awareness…

I even got some time to be able to explain to [the group] why we need to fight for intersex rights. Because it did not occur to them that in a world where you cannot identify as male or female that there are literally areas in the law where you fall through the cracks. My nonbinary child is partnered with an intersex partner who identifies gender-wise as non-binary. But sex-wise, that individual is intersex. So, they biologically can’t really say 100% male, 100% female because they got a little bit of both.

What is your favorite content to create or favorite type of smutlancing work you like to do?

What do you want your legacy to be as a smutlancer?

My legacy as a smutlancer is [that] I want sex and sexuality to come out of the closet. To stop being that dirty little secret; that thing that people don’t talk about because the not talking about sex, not being intentional in our conversation around sex, have led us to epidemics of teen pregnancy and soaring STI rates with people of ALL ages.

Water! *Laughs* Water! If I don’t have water, I’ll lose my damn mind. [Also], my favorite ring light. It’s huge. It’s big enough to almost go over my whole head. And my wonder woman chair cape because I know I’m being a hero and saving the world, so that’s on my chair all the time. Oh, and one or more lit scented candles. If I have those things, I’m golden. I’m striving for minimalism. *Laughs*

This is going to sound so silly [but] watching the movie, “Let’s Get Christie Love.” She’s the only black detective in her precinct. She’s the only FEMALE detective in her precinct. And even though she’s angry about always being sent out undercover as a hooker, she’s damn good at it, and ALWAYS catches the bad guy. She figures that even though this was the limitation placed on her life, she was still going to make a difference… I fell in love with the Christie Love character when I was 2 years old. [So], she’s always been kinda that voice in the back of my head.

Are there a social/charitable cause that’s close to your heart and connected to your work as a smutlancer?”

Yes! An organization that I contribute to regularly (and have for over a decade) is https://unitedcourtofaustin.org/.

Last but not least, name the best, strangest, funniest, wildest thing you’ve experienced as a smutlancer — from a client, someone online, anybody.

Wow! I’m realizing I’m having a little difficulty choosing. *Laughs* The most common thing that happens to me is being mistaken for an employee in a sex toy shop, particularly when I’m telling the staff about how a toy works. That’s a common enough occurrence. [Also], being mistaken for a strip dancer when I go to the topless club. Being asked, “When are you going on stage?” [I respond], “Oh, sweetie, I’m not going on stage. I’m here to enjoy the [show] just like you are. *Laughs*