You Have to Do the Pronoun Thing for Everyone

If you want to call yourself sex-positive – whether you review sex toys or write erotica – then you need to be trans inclusive as well. No trans or non-binary person is expecting you to know everything about gender, and you will not be “canceled” if you mess up or misgender someone. The important thing is that you’re willing to do the work to unlearn cisnormativity and be trans inclusive. Part of that involves being ok with trans folx telling you that you’re still getting something wrong.

Let’s take the pronoun thing, for example. This is something I talked about when I guested on an episode of The Smutlancers podcast, and I’ve seen a lot of sex bloggers make an active effort to do it more! However, you need to do it for everyone, not just trans, non-binary, or gender non-conforming people.

(Note: in this article I have written under the assumption that you understand what terms like ‘cis’ and ‘trans’ mean. If you need a quick refresher on the terminology that I use, check out the resource hub I have collated at Be Nice To Trans.)

What is the pronoun thing? 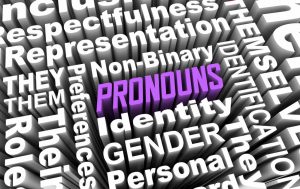 I’m using the “pronoun thing” to refer to the concept of sharing your pronouns when you introduce yourself. And yes, you do have pronouns, even if you’re cisgender – everyone does! Introducing yourself with your pronouns means doing things like putting ‘they/them’ in your Twitter bio or ‘he/him’ in your email signature. It means when you welcoming the keynote speaker to a conference, you might start their bio with something like: “Kayla Lords, who uses she/her pronouns, is a freelance sex writer, podcaster, blogger, all-around sex content creating human*.”

Doing the pronoun thing means that trans people get misgendered less. When we see someone – whether it’s in person or the blurry selfie of an Instagram avatar or just a name at the bottom of an email – we make assumptions about them. This isn’t in itself a bad thing. We sort people into categories because it makes things easier for us. The snap assumption about someone’s gender comes from the same place as us looking at a husky and a chihuahua and recognizing they’re both dogs.

There is nothing wrong with making that “snap assumption” – we all do it. The important thing is to remember that while a greyhound is undoubtedly a dog, you don’t know someone’s gender just from looking at them. Trans and non-binary people deliberately put their pronouns everywhere because we are used to people making that assumption. And we’re used to them getting it wrong. If we repeatedly tell people what our pronouns are, then it means that we will (hopefully) get misgendered less.

Why do I need to do it for everyone?

You need to do the pronoun thing for everyone because it normalizes the fact that trans people are, well, normal. If you’re only doing for trans and non-binary people, you’re marking them as “other.” Which is the opposite of your intention if you’re trying to be more trans-inclusive. Introducing yourself with your pronouns even if you’re cis, or introducing a guest blogger who’s written a post for you, helps remind people that you can’t tell if a person is trans or non-binary and that you shouldn’t be making any assumptions about their pronouns.

For example, if you got to Eroticon without knowing Molly’s pronouns, it’s much better to refer to her as ‘the Eroticon director’ and listen to how other people talk about her rather than assuming that her fabulous heels mean that she must use she/her pronouns. She does, of course, but it’s just as possible that she could use they/them or xe/xem pronouns. It’s also ok to use they/them pronouns when referring to someone who’s gender you’re not sure of, but trans or non-binary folx who don’t use those pronouns might not be comfortable with that.

Introducing yourself with your pronouns if you’re cisgender also takes the burden off the trans and non-binary folks to come out again and again. If someone introduces themselves by saying “I’m Kayla Lords and my pronouns are she/her” then I will feel infinitely more comfortable to share that I use ze/hir and he/him pronouns. It’s hard to be vulnerable and out yourself to a group of people who take being gendered correctly for granted. If everyone is doing the pronoun thing, I would feel much safer.

But it’s obvious what my pronouns are! 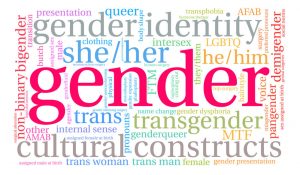 No, it’s not. One of the most hurtful things that cis allies have said to me is that they don’t put their pronouns in their Twitter bio/email signature/conference badge because it’s obvious what their pronouns are. If you think there is no way that anyone could see you as anything but a cis woman or a cis man, that is a huge privilege. Just because someone’s “snap assumption” about your gender is always right, it doesn’t mean that your pronouns are “obviously” she/her or he/him.

That’s incredibly harmful because you’re enforcing the idea that there’s “one true way” to look like a man or a woman. There isn’t. Gender presentation doesn’t correlate with gender identity, and non-binary people do not owe you androgyny in order to be gendered correctly. For example, I wear a skirt and lipstick** some days, but that doesn’t mean that my pronouns aren’t still ze/hir/he/him or that I’m not a trans masculine genderqueer person.

This means that a super-easy way to “ally up” is to put your pronouns in your Twitter bio/email signature/conference badge. You not only show trans people that you know they exist; you show other cis people that they shouldn’t assume anyone’s pronouns from what they look like. It’s also totally ok to ask what pronouns someone uses! You shouldn’t ask someone “What are you?” or “What’s in your pants?” but asking what pronouns you use is polite and means you’re less likely to misgender a trans person.

If there’s one thing you should take away from this post, it’s that trans inclusivity does not begin and end with a one-off tweet where you tell your followers that you “support all #LGBT people!” It takes time and consistency and work.

Trans inclusivity is not about writing a post in support of trans people but not linking to any trans people in that post. You should not make money (or get clicks) off of transphobia unless you use that platform to lift up trans folx too. It’s about listening to trans and non-binary people who tell you that you’ve made a mistake or hurt them, not just blocking them because their anger or pain makes you uncomfortable.

Trans inclusivity is about working to unlearn the cissexism you have been taught your entire life. It’s about doing the pronoun thing for everyone.

*Taken from Kayla’s actual bio. Check out Molly and Kayla’s thoughts on actually writing bio’s in this podcast episode.

**And, nowadays, a mask… which admittedly means only I get to enjoy my lipstick.