The Importance of Saying No (So You Can Say Yes)

At the end of April, I deleted a task off my to-do list that had been sitting there since mid-February.

It wasn’t a task that anyone would notice if I never completed it. It wasn’t a task that would help me make the money I need to pay my bills. Importantly, it wasn’t even a task that really served me. Sure, it would contribute to my vague goal of spending more time commenting on my fellow sex bloggers’ posts because I’m no longer as active on social media to like or share their work there, but it wouldn’t move my smutlancing career forward in the ways I wanted to focus on.

I felt useless every time I copied over to a new week’s to-do list, but I still kept transferring it for a whole nine weeks. I couldn’t just delete it but I didn’t know how to say no.

Burnout and barely keeping up 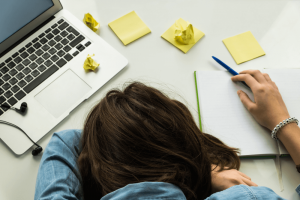 I’m still recovering from a period of burnout. I was forced to prioritize my health over my self-imposed blogging schedule, so I’ve barely posted anything on my blog over the last six months. My mental illness hasn’t gone away, but by April I was mostly over my burnout. I had hundreds of ideas for blog posts and pitches – even if I didn’t have the spoons to write them. I had plans and goals again, and I wanted to get back to moving my smutlancing career forward.

Despite my enthusiasm, I struggled to move forward. I finished working on the commissions I’d taken on months ago, but I wasn’t writing anything new. I spent hours in my inbox but wasn’t really putting myself out there and sending pitches. My time was being eaten up by replying to other people. Answering questions on Twitter, giving people quotes for their articles, or responding to emails from people who were never going to pay my rate for a sponsored post.

It’s all too easy for other people’s tasks to creep onto your to-do list. In my months off from blogging, I’d forgotten that I needed to put my own tasks on my to-do list if I wanted to get them done.

On the day I deleted that particular task, I’d spent an hour talking to another journalist on Zoom. It was about a topic that I really cared about, for an article that I thought was really important, but I didn’t even know if I was going to get a link to my website if I was quoted in the piece. I’d used up my few precious hours of concentration and creativity on someone else’s to-do list.

Deleting it was hard. I was so anxious that I asked a friend to reassure me that it wouldn’t make me a bad person. I felt like I was cheating somehow, in saying no to this task that I’d assigned myself. I’ve spent my whole life being told that I’m not doing enough and telling myself that I should do more.  It couldn’t be that easy, could it? I couldn’t just say that I wasn’t going to do it and decide to stop feeling guilty?

Apparently, it could be that easy. Apparently, it’s far healthier to delete the least important task off your to-do list rather than stay up until midnight wondering why it feels like you work so hard but still don’t seem to move forward.

You are allowed to prioritize your priorities 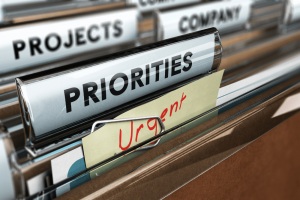 For me, this looked like spending less time in my inbox – and thus getting used to the idea that sometimes people’s emails would go unanswered for longer than I was comfortable with. It looked like me muting more than half of the people I follow on Twitter, so my feed became a more curated stream of content that sustained and inspired me. I felt guilty about muting fellow sex bloggers but when a tweet about the latest transphobic post could send me in an anxiety spiral it was more important to make sure I could check social media and catch any editors putting out calls for pitches.

It sounds harsh; it sounds almost mercenary. And it’s harder than just saying “no” to doing the unpaid emotional labor of explaining to cis people why what they said was transphobic. It feels like I’m being mean when I don’t complete the survey after the virtual workshop I attended. It feels like I’m being a dick if I don’t leave a review on the Etsy shop I bought my friend’s birthday present from. And it feels selfish to say no just because I need to focus on my priorities.

But if I don’t say no, I won’t have the spoons to work on my own projects. If I don’t ruthlessly prioritize my priorities I will never get closer to my smutlancing goals.

You need to say no so you can say yes

It’s 2021, and we’re steeped in hustle culture. We’re told that we need to say yes to everything: that we should reply to every email because it could lead to something great. That we should write for free when we start out because without that exposure we’ll never get paid bylines. And maybe we do to start with, but we don’t have to do that forever.

I think there’s extra pressure on women and people of marginalized genders; on Black, Indigenous, and other people of color, and on disabled folk and people in the LGBTQIA+ community. We’re too often told that we should be grateful for the work we get; we know that we need to work even harder to prove ourselves. For me, struggling to say no definitely links to knowing my worth. I worry that I’m not actually that good at this smutlancing thing, so I need to take every single opportunity that comes my way.

If you – like me – struggle to internalize this, look at it this way: every time you say no to something, you can say yes to something else. Every time you say no to working with a brand whose ethics you disagree with, you leave yourself open to working with a brand that you absolutely love. Every time you decide not to reply to an email from someone who clearly hasn’t even looked at your blog, you have a few more minutes to send a pitch to someone you want to work with.  And every time you’re brave enough to say no to someone else, you can instead say yes to yourself.

Yes, that’s scary. It’s fucking terrifying. But it’s not selfish to say no when something doesn’t serve you. It’s not arrogant to think that your work is worth being paid for or prioritized. More importantly, it’s a necessary part of making progress towards your smutlancing goals.