Writing About Sex Isn’t Easy Money, No Matter What Anyone Says 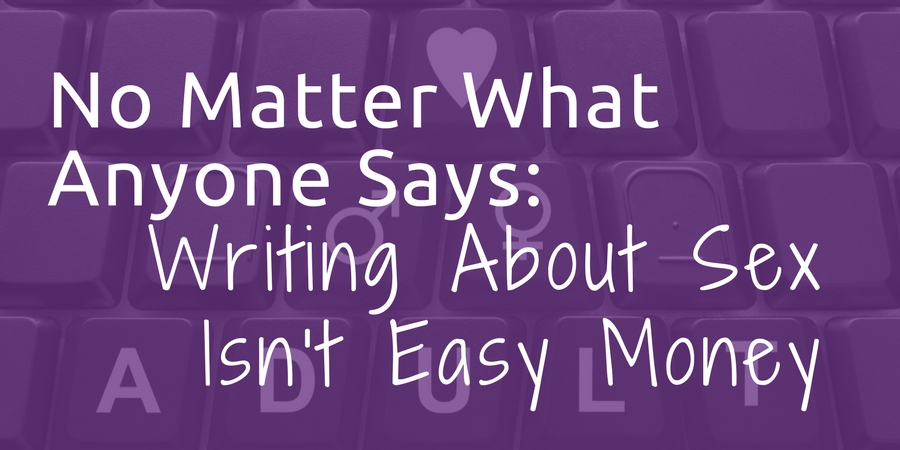 Back in 2015, when I decided that maybe writing about sex was a legitimate career choice (spoiler alert: it totally is), I did the only thing I could think of. I Googled “how to make money writing about sex.” Big mistake.

My results were filled with articles of “legitimate” writers who decided they’d try this whole erotica thing out for themselves. Some said they made a few pennies. Others said that for an hour of work, they made a few hundred dollars. Most of the “advice” I read centered on the idea that writing about sex is a joke, no one should take it very seriously, and yes, you can probably make money at it.

I think the idea for this website was born that day, even though I didn’t realize it at the time.

Where was the information that said, “Hey, here are a few websites to check out” or “This is a good amount of money to charge.”? No where, that’s where. But some advice was fairly universal, and I’m here to debunk it.

Self-Publishing Erotica Isn’t Your Only Option

I have several really good friends who write and publish erotica. They work with publishers on some projects and go it alone on others. They love what they do, and the more steamy smut they write, the better they get. But like any amount of writing, especially the length of a novella, takes time and effort. Since they’re still working their day jobs, regardless of their personal goals, the income isn’t “easy” or in abundance.

Thinking that you’ll throw together some kinky smut, slap up a crappy cover, and become a bestselling author is foolish at best, pure arrogance at worst. You can do that, but it’s not the way to make any real money unless you’re insanely lucky and few of us are. Writing erotica should be treated like the craft that it is. Put your best story forward, edit the hell out of it, care about the cover, and then market your little heart out. But don’t expect that you’ll be swimming in money from it either.

Tell me if you’ve heard this one before:

“We don’t have a budget for paying writers but think of all the exposure you’ll get!”

First of all, people die from exposure. And second, the mortgage company has never accepted my offer of great exposure in lieu of payment. Yes, companies who believe that they don’t have to pay for creative work exist. A bigger yes that there will be days when it feels like every sex toy, adult, or publishing company you talk to is one them.

But real companies pay real money for your writing. A lot like your pitching game, finding these companies means dealing with a lot of rejections, a few bad apples, and offers of pennies for your work. The more you reach out to companies, the better your chances of coming across one who pays real money. If you give up because the first five or even dozen companies laugh at your request for compensation or offer $5.00 or 500 words (a real thing I’ve been offered), you’ll miss the rare company who understands your work and your worth.

It’s Okay to Say No

When you first start out with the mindset that you want to make money, you almost immediately begin wondering if anyone will ever actually pay you. Especially after you get all those offers for “exposure.” The moment you worry about it, that’s also the moment you begin to take those $5.00 or 500 word articles, too.

Look, I started my freelance writing career churning out cheaper articles for cheaper pay. The companies that do this are called “content mills.” There’s a case for doing some work for some of them, but only if they’re offering a relatively competitive wage for mostly decent work. When the company tells you they can only pay $50 for a week’s worth of work, it’s okay to say no. It might not feel like it right now, but as long as you keep at it, more work for better pay will come your way.

Some companies have a rate they automatically offer. Others have never had anyone ask, “What’s your rate of pay?” (I’ve popped a payment cherry at least once). When the going rate is much lower than you normally accept, it’s okay to ask, “What about this amount?” or “How high would you go?” For the company who never thought about payment, tell them your standard rate (I have a few depending on the type of work). If they say it’s too much, find out what they’re willing to pay and decide if it’s worth it to you.

Just like I said self-publishing erotica isn’t your only option (and clearly it isn’t), don’t depend on one type of income forever. Definitely start with one – writing personal essays, informative articles, erotica, whatever. But over time, you’ll want to develop other writing, marketing, or even social media skills that an adult company may need. Why? Because when one revenue stream dries up, you’ll have other options for finding paid work.

I’m only one example, but this might help paint the picture: I write for clients and pitch ideas to online publications like Kinkly and others. I offer sponsored posts on three of my four websites and sell banner ads and podcast sponsorships. I’ve even been paid to share content to social media. You might be thinking that not all of these things involve writing. Think again.

Not all writing looks like the kind you might be used to. But if it can make you money in an ethical way, it counts.

The idea that you can pop up a single blog post, a “Hire Me” page on your website, and sit back while the money rolls in is laughable. Sex might sell, but not for everyone and not immediately. I won’t lie, sometimes you get lucky and connect with the right person at the right time, but luck doesn’t last forever. If you want to keep the money rolling in, you’ve got to work for it, and you’ve got to know your own worth.