5 Reasons You’re Not Working On Your Smutlancing Dreams 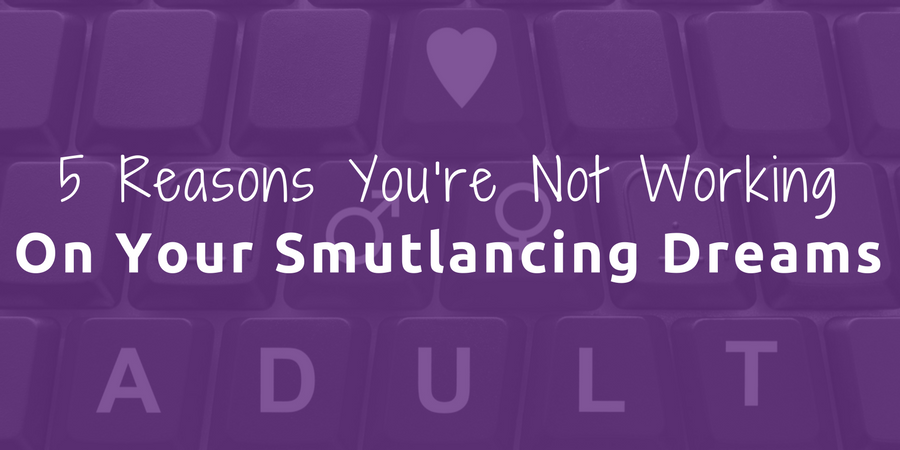 I’m guilty of a very bad habit as a creator.

If the stars don’t align just perfectly to give me the perfect parameters that I need to create something – write a blog post, record a podcast, or work on future goals (like course creation and ebooks) – I won’t do it.

So what does that mean?

It’s too cold (or too hot). I don’t want to write at the kitchen table but Starbucks is too crowded or noisy (or I don’t have money for a coffee). Instead of the hour I want, I only have 15 minutes which means, clearly, my fingers have forgotten how a keyboard works.

I’m Goldilocks and my perfect moment to create is the three bears’ house with no baby bear. And it can derail nearly every project and plan I have.

When my anxiety kicks in or I’m worried about failing (or succeeding), I have plenty of reasons why I don’t start the next thing. I’m not alone. Plenty of creative people find reasons not to start on their work.

You’ll Never Have as Much Time as You Want

Until you’re retired, living in the lap of luxury, or find someone who lets you live in the lifestyle you want to be accustomed to, you’re never going to have as much time as you want. Even if you have the “perfect” life situation, you still won’t have enough time.

Why? Because it’s a myth.

When we’re determined to create our art – write a thing, take a picture, test a toy, do something – we get to work. But when we’re afraid or uncertain, we use the lack of the “perfect” time as an excuse.

For years, I didn’t write because I didn’t have eight hours of interrupted silence. Until the day I decided I wanted to be a freelance writer and I learned that, when push comes to shove and a client waits with a deadline, I don’t need eight hours of silence. It was an excuse I’d made up.

Want an hour but only have 15 minutes? Then use your 15 minutes. You might only write a paragraph or a page, but it’s more than you had before. And it all adds up.

To the writer, creator, photographer out there who holds back from creating your art because you’re not good enough, no one is good enough. At least, not to themselves.

Be wary of the person who thinks every word they type or piece of art they make is perfection from the moment they produce it.

The rest of us worry over commas and colors. We question ourselves before we start, while we’re creating, and long after we publish. When someone genuinely likes our work, we have a split second where we wonder if they’re really talking about us.

It doesn’t matter if you’ve been blogging for five minutes or fifteen years, you will always question yourself, at least a little.

None of us will ever be perfect but by putting in the work, we get better. Better is the goal, not perfection.

Your Idea Won’t Be Completely Unique

Too many people think they have to come up with the newest idea that no one has ever thought of in order to get started. Actually…no.

Completely new ideas are one in a billion. A trillion? Possibly even one in a zillion. A lot of things have already been done.

The person waiting for a brilliant and new idea to hit them.

The person who thinks they can’t start because their idea isn’t new.

We don’t need new ideas as much as we need new voices and perspectives. Yes, you’ve had sex as have billions of people on the planet. But no one else had your unique set of experiences, feelings, thoughts, and perspective. The situation might not be new, but your telling of it is unique.

But they aren’t you. Your story, your view, your outlook on life, your experiences – this is what you bring to the table. This is what makes you unique.

As a creator, what exactly does failure look like? For most of us, it’s that we’ll be ignored, criticized, found wanting, or told we have no talent.

Let me clear something up for you…

No matter how long you write or create anything, no matter how good you get at it, and no matter how many awards you win or how much money you earn, someone will always think you suck.

Failing isn’t putting your work out there and having it rejected by someone. That moment is guaranteed.

Failing is never showing up at all. Not hitting publish on a blog post. Deleting the picture from your camera. Refusing to put your product up for sale. That’s the failure.

Will you always earn what you want right away? Of course not. Audiences, attention, and income take time to build. So does talent, skill, and a catalog of work. But if you never show up, you never get the chance to find out how far you could have gone.

Hear me out on this one. It’s one I’ve come to recognize in myself more recently.

There will come a time when you’ll get into a groove with your work. You’ll publish, write, and make your thing on a regular schedule. People will notice and some of them will like you for it.

Numbers will go up whether it’s readers, followers, or orders. Money will be earned – a trickle at first but more as time goes on.

You’ll be on your way to the place you said you wanted to be. That pie-in-the-sky goal that you told yourself was a little crazy.

To get yourself over the edge into new territory and greater success, you’ll have to do new things. Make new stuff. Put yourself out there in new ways.

And you’ll come to a dead stop. Life will get in the way or you’ll let it get in the way. You’ll question everything you’ve ever done.

Staying small will feel good and comfortable. Why rock the boat? Why put yourself out there even more? It only equals more criticism and hate.

From my perspective, that’s a fear of potential success talking. No success is guaranteed but when you’re on the right path, you can feel the potential bubbling up all around you. And it’s just as scary as when you first begin. Maybe even scarier.

Just like the person who needs the perfect place and time, you’ll have to force yourself to move forward if you want to achieve those big, hairy goals. Swallow the fear, make your thing, and put it out there anyway (she whispers to herself).

This isn’t a complete list of things that stop us in our tracks, just the things I’ve personally experienced. Are there other reasons you’ve used to delay your work? Share in the comments below or on social media!