How to Build an Audience on Social Media

Building an audience on social media is a deeply personal thing. Anyone who tells you to simply follow a set of rules probably won’t be doing you any favours. You are unique and special and the audience you build should be one that is attracted to you specifically. So if I tell you to do the exact things I’ve done, the brand and style you build won’t fit you very well. And you’ll probably have a terrible time on whichever platform you choose.

However, if you’re a newbie blogger unsure of how to build an audience on social media, there are some general tips (which should apply to all social networks) that can help you get started and point you in the right direction. Once you find your feet and build a small audience, you can take off and grow it in your own unique way. Here are a few tips that should help you get cracking.

If you write about sex, the most important thing to remember is that any social media platform can remove your account, shadowban you, or generally mess up your carefully laid plans for social media promotion. Even if you stick rigidly to their terms of service. Even if you’re doing ‘education’ rather than ‘erotica.’ Yes, it absolutely sucks but no, there’s nothing you can do to guarantee your account will stay up. You should always be aware of the rules, and keep an eye out for updates to terms and conditions. Ultimately if you don’t own the platform, you cannot guarantee your account will always be allowed there.

I mention this not to put you off completely, but to caution you away from using any individual social media platform as the core marketing tool for your work. You should always publish the content that matters on a platform you own (a self-hosted website) and include a mix of channels when you market your work. That way if you, like me, get temporarily banned from Facebook (nearly a month now – thanks Zuckerberg!) you have other channels to fall back on.

There’s a famous saying that goes, “The best time to plant a tree was 20 years ago. The second best time is now.” It may seem intimidating when you see all these other sex bloggers on Twitter with thousands more followers than you but remember: Many of us cheated at this game by starting a decade ago. So get started. Set up your profile (selecting your level of anonymity based on what you’re most comfortable with). Populate it with an engaging image, bio, and links, and then start following people you like. 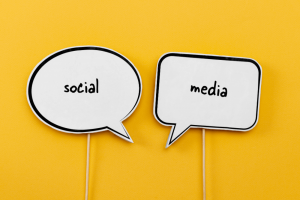 Naturally, you want to use social media to promote your own stuff. Think links to your blog posts, teaser images of toy reviews, and anything else that’ll pull in clicks and traffic. But you also need to join in the conversation. Chat to those who write about similar topics, share their work, and kiss their arses until they pay attention and start following you.

This sounds incredibly cynical, perhaps I’m having a cynical day, but honestly, as someone who’s been blogging for a long time, I still don’t think there’s any better strategy to connect with an influencer than flattery. Be vocal about the work they put out there that you love. When you reckon you’ve built a decent connection with them, don’t be afraid to ask them to follow you or share your stuff.

More broadly, make sure you’re having a proper conversation with those who follow you on social. Join in topical discussions, chat about TV or film that’s relevant to your audience, play games, and generally enjoy yourself. I find that social media works way better if I’m actually having fun on it. Like polling people about how many lockdown wanks they’ve had in the last week, or asking them which zoo animal is sexiest, or ranting about something terrible the government has done and yes, sometimes even sharing pictures of my dinner.

If you write about sex you’ll probably find that people are less likely to share your sexy stuff, so make sure you discuss other topics of interest too. People who like those topics may follow you for the SFW stuff, then learn/engage with your hotter content later down the line.

Be aware of different time zones

Of course, at some point, you’re going to want to promote your work. That’s (probably) why you’re here: I respect your hustle, and I think you should shout about what you’re doing. Back in the olden days, when I used to work in a Real Job and train people in how to use social media, we had rough guidelines for how often you should post a day on each channel. The right amount on Twitter was way too much for Facebook, and every channel had an “ideal posting” schedule. These days I think the rules are more flexible.

If you’ve written a kickass blog that you are super proud of, the number of times you should share it should be determined not by some random ruleset, but how often you think you need to put it out there to make sure your audience has had a good chance to read it. Most of my blog posts will go out on Facebook once when they’re published and Twitter twice at different times of the first day then maybe once again the day after. I also surface old content by promoting it on social roughly a year after it originally went live.

But remember: your followers may well come from different time zones! I think I could get away with promoting recent blog posts far more (once at lunchtime, once in the evening, once overnight for Americans). I only refrain from doing it because I allow myself leeway to retweet people when they quote-tweet my post with something complimentary. By the way, you’re allowed to do this. Don’t be shy about sharing praise – see above about people flattering you because they want you to engage with them. If your followers don’t like it, they’ll leave, and more forgiving followers will replace them. 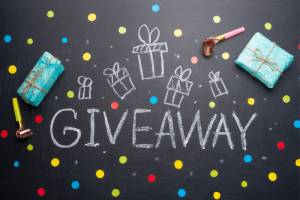 This is such a boring tip that I almost didn’t include it but in my experience, it does work quite effectively, once you already have at least some followers and a few influential people you can tap up for help with promotion. To make sure competitions actually gain followers, you need to:

The final point here makes me sound like an overenthusiastic primary school teacher, but it’s worth remembering. I think everyone has a different affinity with social media and different preferred networks. If you’re really visual then Insta may be for you. If you’re more of a words/fighting with total strangers person, head to Twitter. Maybe you want to pick whichever new network crops up long after this blog goes live, where the people you like most are starting to gather. Ultimately, your brand on social media needs to be one with which you feel comfortable. There’s an element of performance and hustle when you’re there to promote your work, but I fully believe wherever you choose to promote yourself, you’ll be more successful if you’re having a good time.