Why You Should Consider Public Speaking as a Smutlancer

Maybe you’ve been spanked in front of crowds at a kink party, or maybe you’ve shared your scrotum-sucking technique with the cyber world. And yet the idea of public speaking turns your guts to water.

You’re in good company. There’s a widely circulated (but probably made up) statistic that claims that public speaking scares more people than death does.

The statistic may be bogus, but it sounds believable. After all, death is inevitable, but public speaking? We can sure as hell avoid that.

But we shouldn’t—and there’s no need to because Smutlancers have superpowers that make public speaking…fun. I promise!

I’m so shy and socially klutzy that I used to write down my own name in my notes for business interviews. But I’ve spoken about smut at a national conference with thousands of attendees—and loved it.

The benefits of public speaking 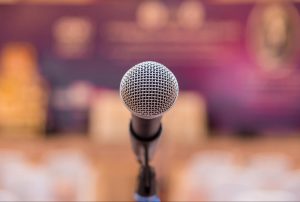 Public speaking—or other forms of putting yourself “out there” in modes other than writing—can really help a Smutlancer’s career (and income).

I’m going to consider “public speaking” to be any sort of talking that tends to freak writers out, including in-person lecturing, video (live or recorded) posts, podcasts, and more. Here are some benefits.

Connect with your readers as a real, live human being.

People like to feel they know their content creators, and seeing your quirky smile in person—or via live video, at the moment—makes them feel like they have a relationship with you. And that makes for loyal readers/followers.

Build credibility by establishing yourself as an expert.

Anyone can start a blog. But there’s a perception that if you’ve been allowed to address a group, you must be an expert. I’ll tell you a secret: I’ve gotten my speaking gigs not because I was the biggest expert out there, but because I had the guts to ask to speak (and because I always have a clever hook or angle, but Smutlancers know how to make those, too.)

Once you’ve spoken on a topic, you’re more likely to be allowed (or asked) to speak on that topic or related matters in the future. You may end up focusing on that topic in your writing, as well, until you’re the go-to person on the issue.

For speaking to a live (in-person or virtual) audience, you might get anything from a discount on your conference fee to actual money, plus travel expenses.

You’ll capture an audience that would rather consume content in audio or video (or in-person).

Not everyone is a reader. The wider the span of media your content appears in, the more people you can reach.

So, what about those superpowers? 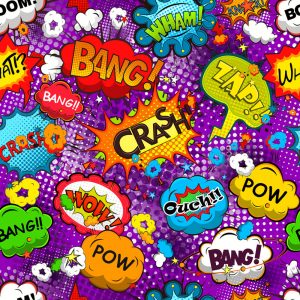 I never step behind a podium as myself. I send my public-speaking persona.

Think you don’t know how to create a persona?

What are some of the qualities your persona needs?

Real-life Veronica doesn’t even answer the phone, let alone volunteer to be interviewed on podcasts. But my persona? She’s so excited to tell you what she knows. She makes a joke when she mispronounces a word. She’s eager to help the audience learn something, and they do. And she makes damn sure they hear her website address on the podcast and that it’s in the show notes, and that she’s promoting that podcast.

If you don’t know where to start, decide which superpower you want to use: Writing a character sketch? Imagining the role of the polished speaker, then practicing being that person? Massaging your blog persona into someone who’d be dynamite on stage? Then flesh out the persona until you know how they walk, how they speak, what they do when they spill coffee down their front just before they go on stage.

Give it a try, then let us know how it went. I know you—no, your persona—can do it.

Veronica Bly (she/her) is an editor and sex blogger who is proud to be filthy and over fifty. You can find her at veronicably.com or on Twitter as @BlyVeronica or Instagram as @veronicablyblog.