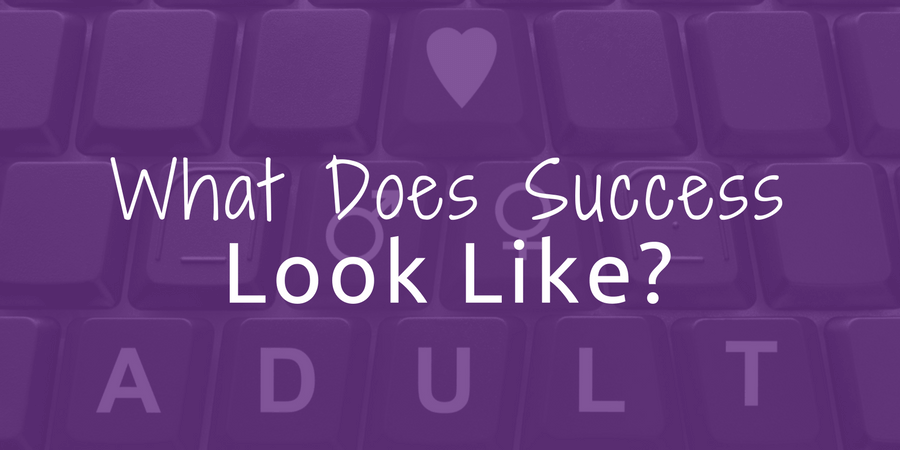 You can blame Cara Thereon (whom I adore) for this one. We got into an amazing conversation on Twitter about jealousy, comparison, and success. From that, this blog post was born.

Too many of us see what other people are doing and ask ourselves, “Why aren’t I doing that yet? Will I ever have that level of success?”

I do it. You may do it. Even the people you admire are probably doing it.

We’ve discussed the comparison game before. It gets under your skin and stops you from moving forward. We perceive someone else has “success” that we want, and we think we’re lacking some how.

Maybe what we really need to do is redefine what success means.

What We Think Success Is

When we’re having well thought out conversations with people we care about, we talk about living our best life, finding happiness, and doing what we love. We say that’s success, but then many of us turn around and bemoan the idea that we aren’t like someone else.

We see success in others as:

Other creators do things we want to do or think we “ought” to do, and we find ourselves lacking. Our perception is that they’re doing something better or smarter than we are. We tell ourselves they have a drive, talent, or even luck we don’t have. Sometimes we believe that we’ve fallen behind or the other person had “overnight” success.

One of the worst things we can do is compare our reality to someone’s highlights on social media. Very few of us talk about the rejections we get before we get a piece published. Not everyone admits to feeling insecure about our work. Yes, even the people you perceive as successful. And most of those successful smutlancers you admire think they’re not doing enough and are comparing themselves to someone else. (Yes, really.)

Questioning Myself and My Work

I am definitely a writer who thinks I don’t do enough — not enough promotion, not enough writing, and certainly not enough time working on my next goal. For about a year I had to be careful scrolling through Twitter. I’d see other bloggers sharing their published pieces and wondering why I was such a slacker.

I also worried that because I do a lot of ghostwriting and behind the scenes work that I wasn’t a “real” sex writer. If no one knows I’m writing, is my work valid? Sounds ridiculous now, but that’s what I thought.

I get paid to write about sex, and I work for myself. Plenty of people would kill for that. But I’ve had to work hard to get comfortable with what I do, and its lack of visibility. It doesn’t help that I’m always striving towards the next goal — it can make you feel like you’re not keeping up.

But it’s those goals and the work it takes to achieve them that helped me rethink of my definition of success.

What Success Can Mean

Until I got into this conversation with Cara, I’d never really given my definition of “success” much thought.

Is success about the amount of money I make? My visibility among readers and podcast listeners?

Those can be used as markers until you try to compare yourself to someone else, someone you perceive as doing the same thing and succeeding where you’ve failed.

To me, now, success is simply meeting my goals. I always have several that I’m working towards, and I’ll never reach them all at one time. (Which is kind of the point for me.)

But when I reach a goal — no matter how small — that’s success. And each accomplished goal moves me in the direction I want to go. That, too, is success.

This means that success is achieved in stages, step by step. You might not see it until you start looking back on the past few months or year. But that’s exactly what you should do.

Set some goals, achieve them, inch by inch, and from time to time, look back to see how far you’ve come.