Editor’s note: This month’s spotlight is an interview with my husband and business partner, John Brownstone. I didn’t know Chelsea planned to interview him (as she has a lot of freedom in what she writes and who she interviews) but I am enormously proud of him and love seeing him featured as a smutlancer. That being said, I figured I’d point out the obvious bias I have towards him as a human, let alone as an interviewee. ~KL

During the early part of the pandemic, Gabrielle Drolet of the New York Times wrote an article discussing how online sex toy sales increased. Drolet wrote, “As the pandemic approached its peak, online retailers saw sales spike. Adam and Eve reported a 30 percent increase in online sales in March and April based on the same time period last year… Also, during the height of stay-at-home orders, Amazon seems to have continued to ship sex toys, despite their nonessential status.”

VICE senior writer, Hannah Smothers, also wrote an article about the increase in online sex stores sales. Smothers writes, “Sales for at least five major sex toy brands have seen significant increases throughout 2020, seemingly in step with instructions to stay inside and avoid other people. A rep for WOW Tech Group, which owns the sex toy brands WeVibe and Womanizer, told VICE that both brands had already exceeded their monthly sales projections by more than 40 percent as of March 25…Sales for Womanizer, which mostly makes toys designed for masturbation, were especially high. Sales throughout March were also up for COTR, the company that owns b-Vibe, Le Wand, and The Cowgirl. Alicia Sinclair, CEO and founder of COTR, told VICE online sales across all three brands were… about three times higher than this time last year.”

So, not surprisingly, PR Newswire stated that “the online sex toys market is expected to grow by USD 5.74 billion during 2020-2024.” I think it’s safe to say that John Brownstone, this month’s Smutlancer Spotlight interviewee, made a great career decision.

During our interview, John Brownstone talks about how he got started in the sex toy business, almost being outed as a kinkster in a previous job, his daily routine, and more. Check out our interview below: 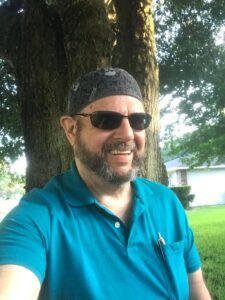 It really began when I started doing the editing for Kayla’s podcast. And then, I moved into more of a partnership role [by] actually being part of the podcast. We began talking about my toy making there, and it then took on a life of its own.

I am, at this point, a full-time smutlancer. I did have a day job several years ago, but I was outed by an ex. Due to the nature of my job and to protect my family, I stepped down from the day job.

Are you open with anyone about the work you do?

There are some family and friends that know what I do. When I was outed I decided to come out to them on my own before they found out second hand. As for using a pseudonym, I do, mostly to protect the family as we do have kids.

What type of job were you working at when you were outed that forced you to come out to your family?

I was working in a fairly high-profile and public sector IT position.

What was the process like coming out to your family?

The initial reaction was shock, quickly followed by fear. The feeling was like standing in a void and not knowing what was coming or what would happen. It was a very difficult conversation. Most of them were very accepting when they were told but there were a few who were shocked and to this day don’t talk to us.

What advice would you give to someone who has to disclose their kinky lifestyle?

You can never gauge someone’s reaction to something. I would say hope for the best [and] expect the worst, [so], that way you’re not surprised.

Besides leaving your job, how did you handle being outed at work initially (especially by an ex) and what advice do you have for people dealing with something similar?

This to me was even tougher than talking to family. This was my job, my career. There was a lot of conversation that went on between Kayla and I prior to [deciding] how to handle it. To be clear, work never did find out, for which I was grateful. If it had been [found out], it could have easily become a public media circus. Every day I would go to work with knots in my stomach wondering if this would be the day they found out.

It comes down to weighing your options and what the possible outcome of being found out at work could mean for you. For me, the best option was to step down from my job before they found out.

When it comes down to being outed as a kinkster, each person’s story will be different. [Ask yourself], Do you have a family [or] children? How liberal is your work environment? These are all things you need to consider. Also, as scary as it all may seem at the time, there is a light at the end of the tunnel. You can come out the other side stronger and better. Once the dust had settled, there was a freeing feeling about no longer having to hide who I am.

Ahhh. That all makes sense. Maybe it’s my naivete, but why is it that you could’ve lost your job if people found out about your kinky lifestyle? You’re not soliciting sex (even tho I believe sex work is work). You’re not using company property to talk about your kink lifestyle, so legally, what grounds would they have had to let you go if they did find out?

At that time, I worked for [a] public school district. Your personal life and job life are very intertwined, sadly. Even though I had no contact with kids, it still would have been looked down on, and, as anything you do is public knowledge, it could have become very public.

Two years prior, a teacher was found to be working nights as a pole dancer/stripper. She was not soliciting sex or doing drugs. She needed to make extra money. Let’s face it, teachers don’t make a lot. She lost her teaching job and was vilified on the local TV and newspapers.

Two people I worked with in admin were having an affair. They kept it out of work, but [people]  found out. They both lost their jobs. [The] private sector is a bit more forgiving than working in a public sector job.

When and how did you realize this was what you wanted to do professionally?

I think that came to me about two years ago. Prior to that, I had been making pens, bowls, and other items. When the sales of my “weapons of ass destruction” began outpacing my other items, I knew I needed to turn my focus there.

How did you get started and how long before you felt like you had “made it”?

I started by making a few impact toys for personal use. While I have an online shop and have done some kinky craft shows, I feel like there is always something new to learn or something new to make.

What’s one thing you wish you had known when you started?

Generally, I wake up earlier than everyone else in the house, [so] I make a cup of coffee and then sit to read sex blogs I follow. [Next], I feed the furbabies (a dog and two cats) and head out to my workshop, which is a shed in the backyard. I’ll spend a good four to five hours there. Then it’s lunchtime. After that, I’ll spend my time taking pictures or putting [the] finish on paddles, etc.

What, if anything, is your favorite type of smutlancing work to do?

[Making] wooden knives by far. They were born of a desire to do wax-play with Kayla. She didn’t like knives, which is a favorite, to remove the melted wax. I was turning a piece on the lathe and got it so thin it took on an edge. I thought to myself, “that’s as sharp as a knife.” A light bulb went off over my head and the wooden knives were born.

Music. I’m always listening to music while I work. I wear ear protection due to the machinery I use. I have ones that are OSHA rated but allow me to listen to music. I have created a bunch of playlists with music from classic rock to metal and contemporary classical.

I have Kayla to thank for that. Just as I inspired and supported her to achieve her goals in life, she, in turn, did the same for me.

Chelsea A. Hamlet (she/her) is a writer, blogger, and ghostwriter. She also works at a sex and lingerie store in New York. When Chelsea’s not working or writing, she’s either eating her favorite foods, looking up parts of her birth chart, or watching 90s sitcoms. Check out her site, chelseaahamlet.com, and follow her on Twitter and Instagram at @chelseaahamlet.