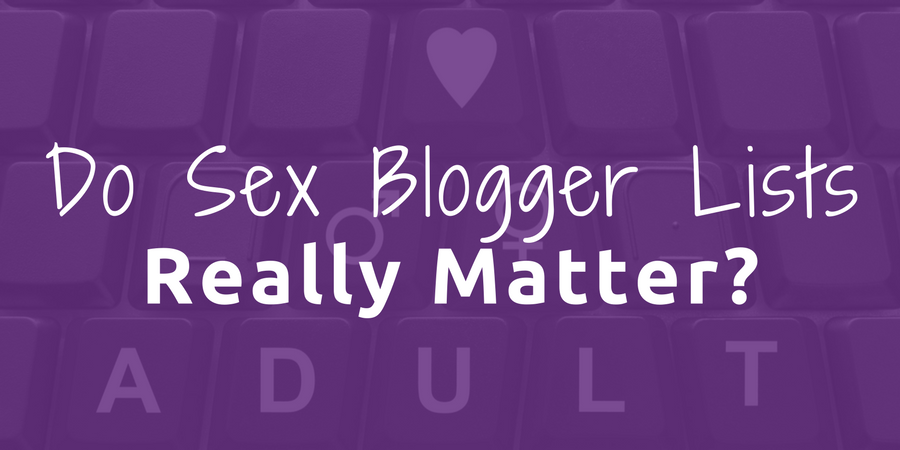 ‘Tis the season – the sex blogging award season. Kinkly announced voting has opened for their annual Top Sex Blogging Superheroes list this week. At the same time, my good friend (and all around lovely human being) Molly Moore announced nominations are open for the Top 100 Sex Bloggers list.These two sex blogger lists are the biggest ones I’m aware of. Although other bloggers put together their own smaller lists towards the end of the year that are based on their personal preferences.

As it happens every year, some of us enthusiastically embrace the list-making while others cringe from it – for a variety of reasons. If you’re a sex blogger hoping to one day make at least enough money to pay your hosting fees, you should be asking – do these things matter?

Let’s get one thing out of the way. No single list is perfect. Some blogger will always be left off or get listed lower than their fans (or they) think they should be. Why? Because list-making, no matter how objective it tries to be, is inherently subjective. After all the objective stuff gets counted, a human being has to go through to break ties and make decisions. Molly offers a very clear explanation about how this gets decided since she took it over. Kinkly offers a less explicit explanation. But it’s important to remember that no list makes everyone happy. Sometimes, they even anger people. Only you can decide if you’ll interact with a list and whether it matters to you. If you go looking for perfection, though, you’re likely to be disappointed.

Recognition of What You Do

Many of us write because we can’t imagine doing anything else. We have something to say, and damn it, we’re going to say it. But that doesn’t mean we don’t like validation of our work. If we didn’t want people to read it and like it, we’d all be writing in diaries with a lock and key. Seeing your name on the list provides some validation – at least it did for me. It made me feel more real, like this wasn’t all in my head.

Putting yourself out there and asking readers to nominate you feels weird, but it’s another form of validation. Every year, blogger award season sends people like me into a frenzy of “Vote please” tweets and other people into hiding as they can’t stand the idea of asking for votes. I hate that anyone feels that way. No matter how small or big, new or old your blog may be, it’s worthy of even a small form of recognition.

Reaching Out to Your Audience

In order to get nominated or the pre-qualification votes (Kinkly requires five), you’re likely going to have to ask your readers. I learned a hard (but good) lesson during the 2016 season. I’d been dealing with my mental health and got busy with my freelance writing, so blogging hadn’t been a priority. I only published two posts a week, an all-time low for me.

I saw that nominations for the Top 100 Sex Blogger list had been opened for weeks, and there were only three days left. When I looked at the comments, no one had nominated me. I’d fallen so far off anyone’s radar, I didn’t come to mind immediately. It hit me hard. I didn’t regret taking time off, but I hated being forgotten. So I took to Twitter, asking my followers to nominate any of their favorite sex bloggers, and I hoped I was one of them. It worked. I didn’t rank very high, but at least I ultimately made it to the list. Reach out to your audience. When they like what you do, they want you to get recognized for it.

Being on a top sex blogger list might bring with it bragging rights, but most of us keep it low-key. We’re excited but we also realize we’re not the only blog out there. Typically, the top blogger on the list expresses absolute shock that they made it that high, and the rest of us think, “But you’re so great! Of course you’re number one!” So while many of us pop that badge up on our blog indicating our bloggy award, the real benefit comes from the list itself.

As a Kinkly contributor, I get views from the articles I write, but I also get a lot of views from the sex blogger directory. I’ve had companies reach out to me because I’m on the list (as I’m sure they reached out to many others). Their emails say, “We saw you made the list – congratulations! Would you like to work with us?” Do all of these turn into a ton of money? Of course not. But it means that the companies who might pay you money know you exist. Being able to cut through the blogging noise to get noticed matters…a lot.

Sex Blogger Lists Matter if You Think They Do

From a pragmatic point of view, anything that gets my blog, picture, and name out to more people (in a positive way) gets my support and enthusiasm. As someone who’s highly competitive, I definitely want to be somewhere on a list. I use my ranking each year (never all that high but solid) to spur me to do more. After the 2016 season, I used that lack of nomination thing to bring myself back into the community in a more visible way. It wasn’t about being on some list but working harder to be a better blogger. In the past several months, I’ve seen benefits from being on these lists in terms of views and companies reaching out. But the list doesn’t earn the money or build the audience – you, the blogger, do that.

So does the list matter? Only if you think it does, and only if you want it to. But if lists like this stress you out or spark your anxiety, leave it alone. You have to do what is good and healthy for you. As long as you keep writing and pushing forward, you’ll build an audience and maybe one day, the idea of nominations or a list won’t stress you out at all.

Ultimately, the question you have to ask yourself is this: Do I write for the sex blogger lists or for myself? You know what the right answer is…

Okay, I know people have thoughts about these lists. Feel free to share yours in the comments section below!