If you’re going to write about sex, sexuality, gender, relationships, and/or the issues associated with any of it, I believe it’s necessary to learn as much as you can. One way I love to educate myself is through reading. Every so often, I’ll share a book I’ve read and why you might want to read it, too. Affiliate links are included in this post. If you click an affiliate link and buy something from the site, I make a small commission.

I found The Scarlet Sisters: Sex, Suffrage, and Scandals in the Gilded Age by Myra MacPherson in my local library. Which was pleasantly surprising as it’s not a place I usually go looking for books about sex or sexuality. Reading the jacket, I kept thinking, “Woodhull, Woodhull, I know that name…” And of course, it came to me quickly enough – Woodhull’s Sexual Freedom Summit. While I’ve never been to the event, I was eager to read about the lives of women who inspired it.

About The Scarlet Sisters

From Goodreads: “A fresh look at the life and times of Victoria Woodhull and Tennie Claflin, two sisters whose radical views on sex, love, politics, and business threatened the white male power structure of the nineteenth century and shocked the world. Here award-winning author Myra MacPherson deconstructs and lays bare the manners and mores of Victorian America, remarkably illuminating the struggle for equality that women are still fighting today.” 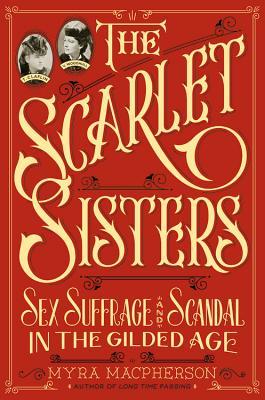 My Take on The Scarlet Sisters

Victoria Woodhull (the most famous of the sisters) and Tennessee (Tennie) Claflin would have been fascinating enough without their work in free love and equality. They came from questionable and meager beginnings, rose in financial wealth, spoke their minds, and eventually, ended life in a completely different place than where they began. While their activism was powerful and important, their lives, in and of themselves were fascinating.

The two women were the first female Wall Street brokers in history and may (or may not) have been backed by Vanderbilt money. They were willing to threaten, bribe, or blackmail to get what they wanted. As a result of their attitudes and their beliefs, they made enemies of men and women. The sisters spoke out for what they believed in and fought for what they wanted.

Tennie was a doting sister to Victoria, following whatever plan her big sister devised. She was considered the more beautiful of the two and much more lively. I imagined Tennie as the outgoing extrovert and Victoria as the introvert who was exhausted by the work she chose to do (I feel your pain, sister).

Their Place in History

Because of their outspoken views as younger women, they were the focus of slurs and slander for years. Historians do one of two things with the written record of the time: take it as fact or reject it completely. Myra MacPherson used her journalism skills to piece together what she could determine was likely truest. In typical fashion, it’s probably somewhere in the middle. They were imperfect women in an imperfect time fighting for equality.

Over the years, they worked with (and sometimes against) major historical figures: Susan B. Anthony, Elizabeth Cady Stanton, Harriet Beecher Stowe, and Frederick Douglass. Victoria Woodhull was the first woman who ran for President with Douglass named as Vice President on the ticket. While this little tidbit gets reported frequently (especially since the 2016 election), MacPherson points out there was no record that he even acknowledged the ticket or his part in it.

What Were They Fighting For?

During their activist years, they fought for an idea radical to the Victorian mindset. They believed in the idea that people should only marry for love and divorce when unhappy. It was called “free love” at the time – not quite like what they were talking about in the 1960s and 70s, but still radical. They also decried the blatant double standards between women and men, especially with regards to prostitution. The sisters worked hard to gain the vote for women but also felt it was important to vote for people who supported women.

How much of this sounds familiar more than 150 years later?!

They rejected the idea that a woman’s sexual “morality” has any bearing on whether a crime has been committed against her or whether she’s committed a crime. Because of their causes, they were thinking primarily of prostitutes and sex workers but we know it extends well past that demographic. Rape culture isn’t a new phenomenon.

Myra MacPherson is an excellent writer and her journalistic fairness comes through in every page of The Scarlet Sisters. Victoria Woodhull and Tennie Claflin weren’t perfect, but they were bold and daring. Whatever their reasons for the work they did – and some of them were less savory than others – they fought a fight that should seem familiar to anyone who writes about sex today. They’re also proof that we didn’t invent this fight, but we also have an obligation to continue using our voices to push society a little more.

The Scarlet Sisters is an excellent book and an amazing story. I would watch the movie of these women’s lives – in all their gritty, back-biting, sneaky glory. They weren’t perfect but they were amazing.

Get your copy ♥ Take a look on Goodreads