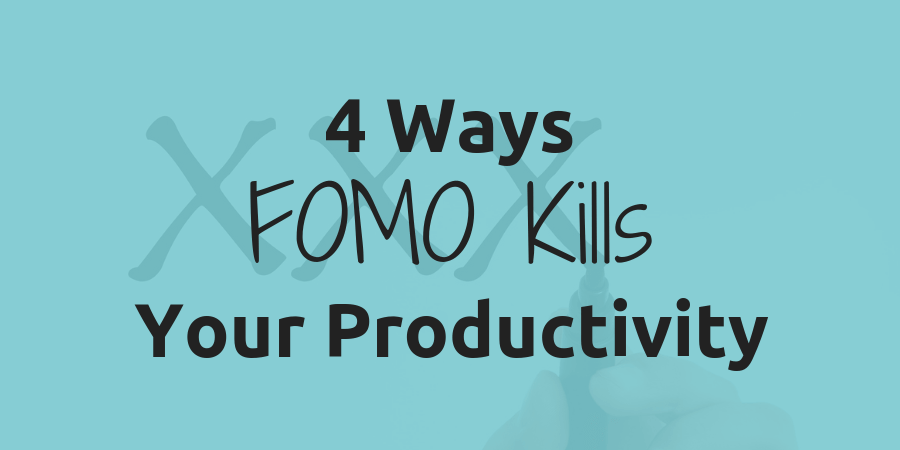 FOMO or Fear of Missing Out is an absolute drain on a lot of us. It’s not good for our confidence, our productivity, or our mindset. How do you know if FOMO has you in its ugly grips?

Are you scrolling through social media, and even though it’s making you feel awful, you can’t stop?

Do you randomly check Twitter or Instagram, knowing you should be working, but wondering if there’s anything interesting going on?

A lot of people think of FOMO as not wanting to miss out on fun stuff, the Twitter conversations, and the fun IG stories. For me, it tends to hit when there’s breaking news…like Senate testimony of a courageous woman and a gross man who is then confirmed to the highest court in the land. (UGH)

No matter why FOMO gets you, here’s how it can kill your productivity. Which is why sometimes we really do need to put down the phone, close the browser, and just to get to work.

You Compare Yourself Too Much

The comparison game — I’ve done it, you’ve done it. We’re scrolling through Twitter, and we see what other blog posts, articles, or videos people have posted. Maybe they did something cool with video or took a sexy picture. Instead of thinking, “Hm, good for them,” we spiral.

Why didn’t I do that? When will I ever be that good? When? Why? How?

And do we get back to work, feeling good about our goals? Not usually. We lose our train of thought or we wallow. I tend to scroll obsessively, wondering who else is doing amazing things that I’ll never do. I know it’s not healthy…I’m working on it.

This is the most obvious way FOMO hurts productivity. Instead of writing the thing, publishing the thing, or promoting the thing, you’re scrolling. And I get it. Sometimes we get nervous about the thing we’re doing, and procrastination on social media makes us feel good. Until it doesn’t (see above).

Either way, though, as we’re making sure we know what’s going on in the world (or just in our friend group), we’re not getting work done. I’ve done it in mid-thought, come back to what I was writing, and lost the thread of my entire post. So not only did I lose time with all my social media lurking, I also lost what I wanted to say. When I do this, it takes me twice as long to finish as it would have if I’d let myself ignore social media for 20 minutes.

You Wonder Why You Bother

While this one is related to comparison, it’s a bit different. Instead of wondering when you’ll do something, you, inevitably, see something that you want to do. But because you’re scrolling, chatting, and looking — instead of working, you start wondering why you should bother. Someone else already did it (you know, because you just saw it on Twitter!), so who are you to do it, too?

Ugh, I hate it when anyone feels this way.

There will always be someone else who talks about your topic or does something similar. Original ideas don’t exist anymore. But what the world doesn’t have is your voice, your experience, and your perspective on the topic. We need you to create your thing.

You Worry About Being Forgotten

FOMO might be about us wanting to know what’s going on, but if we’re really honest with ourselves, we’re also a little afraid of being forgotten, too. It happens to me all the time. If I get too quiet on Twitter, my conversations dry up, and I get fewer mentions. I start wondering if anyone knows I’m alive anymore. To “fix” it, I pop online when I should be working to send a “hilarious” tweet so everyone remembers me.

Frankly, if you’re working on something, it’s much better to ignore social media for a little while, get it done, and hit publish. Believe me, people will notice the work you’re doing, even if you’re not having conversations online with them. And when you’re done, you can still chat it up. I promise. (She whispers to herself.)

Yes, FOMO gets us even when we’re not in the middle of creating our smutty thing, and yes, we have these thoughts then, too. But for all of us who keep checking Twitter “just in case” while we’re supposed to be writing, I’m begging you to stop. (She whispers to herself.) Get the work done and then scroll to your heart’s content.

I’m not perfect at this by any means. But I easily get much more done when I put my phone in another room or close Twitter in my browser. Twenty minutes of uninterrupted writing gets me so much farther than an hour of trying to work and scroll at the same time.

P.S. This isn’t a judgement call on anyone who routinely does this…unless I’m also judging myself. It’s just a reminder to all of us (myself included) that if we’re trying to be successful smutlancers (by any definition), we’ve got to get to work.