Anyone who says writing is easy, I recommend they seriously try it.

From someone who adores writing, writes as part of a career, and holds a qualification in writing, it is not easy! So, you can stop putting yourself down when trying to write that story, under the guise of, “Writing is supposed to be easy!”

So, you want to write a story. You’ve got the idea in your head and a rough idea for your characters. But how do we build on that? How do we take our characters from two-dimensional archetypes to three-dimensional human beings?

Here are four writer-approved techniques to do just that:

These questions can be as basic or in-depth as you like. They can form basic traits a writer needs to know about their characters, like looks, to complex nuances, such as how a particular memory/event affects them now. The more questions you ask, the more you will find out.

One Character Can Inspire Another 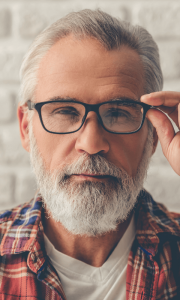 My primary example is a character called David “Deacon” Kaye, from the TV series SWAT. His likeness (actor Jay Harrington’s gloriously gorgeous salt and pepper hair and beard) has served as a basis for many of my characters, in particular, my OC, Silver Fox, in my Indulge series on my blog.

To me, the character of Deacon, both aesthetically and in certain traits he holds, regarding family and his very clear protective streak, caters to a lot of the traits I like in my male, Dominant characters: I want a gentleman.

Find Out What Your Character Wants

This is a big one and will be subject to change as your story progresses. That’s the beauty of crafting your stories: Things will change. That can also be a stressful part of the writing process. So, don’t beat yourself up. Go with the flow and listen to what your character wants.

It might sound a bit nuts, but it really does work. Writers will tell you about that one chapter, that one paragraph, that one piece of dialogue you originally planned for the character, but your character folds their arms, shakes their head, and says: “No, I’m not doing that. I want to do (x) instead.”

So instead of fighting against the current, go with it. Listen to what your character wants. Does he want to settle down and start a family instead of being the loner you depicted him to be? Write it down, but keep your original notes so you can compare, change, and adapt when a plotline, or character trait, changes, because sooner or later it will. 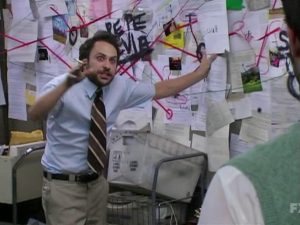 Time to channel that infamous meme of Charlie from It’s Always Sunny In Philadelphia.

I say this with caution: Don’t snow yourself under with too many notes about your character. Been there, done that and it just causes unnecessary stress. So, when we write our character profiles, make them as clear, concise, and detailed as you can. As my former writing lecturer and dissertation supervisor once said to me: “Your readers don’t need to know everything about your character, but it helps if the writer does.”

Creating a new, fully formed human takes time and work. It’s a marathon, not a sprint. The more you know about your character, the better, so you can fully flesh them out on the page and go back to notes to cross-reference, add, take away, and create anew. The more you find out about them, the easier it will be when the time comes to write those words: “Chapter One”.

What’s important to remember is: while it might seem like an uphill battle at times, you’ve got this. No go forth and get to know your characters!