Book Review: For Her Own Good: Two Centuries of the Experts’ Advice to Women 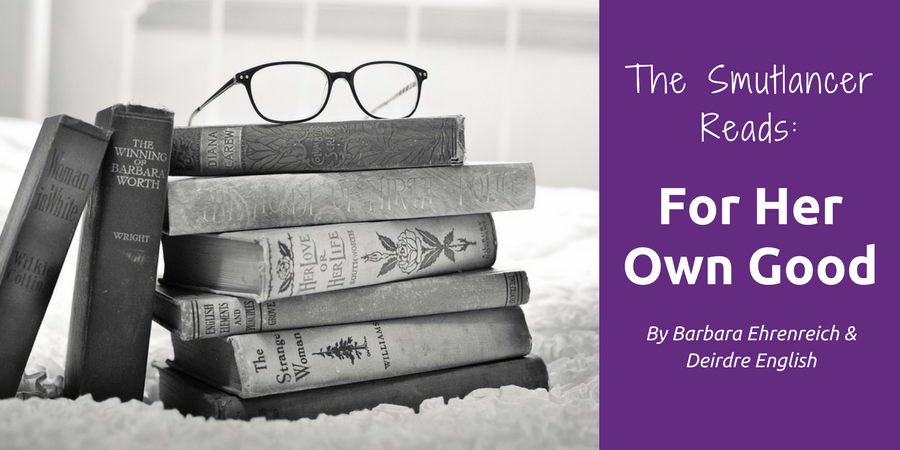 If you’re going to write about sex, sexuality, gender, relationships, and/or the issues associated with any of it, I believe it’s necessary to learn as much as you can. One way I love to educate myself is through reading. Every so often, I’ll share a book I’ve read and why you might want to read it, too. Affiliate links are included in this post. If you click an affiliate link and buy something from the site, I make a small commission and you fuel my coffee addiction.

I’ve read Barbara Ehrenreich’s work in the past – Nickel and Dimed was all too real to my life at the time, frustrating, and sad. I had no idea that she’d been writing far longer than that book’s release or that she wrote about gender issues. A few minutes spent in my local library (one of my favorite places), and I learned otherwise. For Her Own Good: Two Centuries of the Experts Advice, written by Ehrenreich and Deirdre English, was published in 1978. The version I read was the 2005 edition.

About For Her Own Good

From Goodreads: First published in 1978, this classic history, now revised and updated, brilliantly exposes the constraints imposed on women in the name of science. Authors Barbara Ehrenreich and Deirdre English have never lost faith in science itself, but insist that we hold those who interpret it to higher standards. Women are entering the medical and scientific professions in greater numbers but as recent research shows, experts continue to use pseudoscience to tell women how to live. This edition of For Her Own Good provides today’s readers with an indispensable dose of informed skepticism.

When the forward of a book upsets you, you know you’re in for an education you didn’t know you needed. Most of what society believes about a white woman’s role and to a lesser extent all women’s roles in American culture was patently untrue. Men (white and rich) went looking for the answer to the Woman Question – a problem that didn’t really exist. After the industrial revolution, what was society to do with all these women (upper middle class and white) who no longer had the same amount or kind of work to do?

The timeline of how doctors went from being seen as unnecessary quacks to completely circumventing midwives, healers, and wisewomen was both maddening and fascinating. These women were the healing heart of rural and urban communities, especially in poorer areas. For a long time, because the experts were so concerned about rich, white women, they cared little for how (or if) the poor received care. But eventually through rules, regulations, laws, and lies, they pushed out the women who’d helped their communities for years. Worse, they took away what many women of the time might have considered their purpose in life.

Turning Us Into Social Experiments

White women as frail and dainty – and in need of special treatment – wasn’t new to the Industrial Revolution. But this was when it became monetized for prestige in the name of “science.” First the doctors needed frail women who could do nothing around their own home. Later they needed those same women to be less needy and grasping for the attention they received from those doctors. It was a problem of the doctors’ own making, but it was the women who suffered.

The answer to this new problem was to turn the perceived life of women (but not all women) into experiments – domestic duties and motherhood, specifically. Laughably, white men with no experience in either saw a “problem” with women and how they raised children and decided to “fix” it. The problems varied from decade to decade. First mothers were too soft, then too harsh, then too clingy. Basically, women couldn’t win. By the mid-20th century, experts turned on the housewife (after beating up mothers for so many years). These so-called experts were actually marketers looking to sell the next product to women.

For the past two hundred years or more, everything about women’s domestic work has been questioned, critiqued, and found wanting. Anytime a woman cracked under the pressure, a new theory was found to justify the new cure for this new Woman Question. Feminism and women’s liberation represented the rejection of all of this, but it didn’t fix everything. After women’s lib, sure, women worked, but they also kept house and worried (to this day) about the “right” way to raise children.

I saw a lot of myself in the post-feminist movement woman they described, especially as a mother. We still reach out to perceived experts for help. Few of us realize that when their advice doesn’t work, we’re not the problem. In the 21st century, we’ve got more advice than we can possibly consume.

Throughout the book, the authors touched on a variety of topics that felt extremely modern (considering the edition I read was 12 years old). Gender as a construct; how women of color and the poor were ignored in all of this expert advice; and that even today we’re still feeling the effects of the “experts” on our lives. The vast majority of the advice was not at all concerned with women of color or the poor. Many doctors of the time saw them as little more than savages. They also assumed these women couldn’t be helped or didn’t really need help. [And if that irks you even a little bit, you might be like me and yell at the book every few pages.]

I definitely recommend For Her Own Good to anyone who wants to understand a little more about some of the gender biases women experience in our daily lives. Everything has a beginning, and some of the worst things I’ve believed about myself as a woman over my lifetime seem to have begun over 200 years ago. While I am a feminist, I’m not always on the front lines demanding something from the world, society, or government. That doesn’t mean I don’t need to know what came before and how we got here. I think this book gives us a good understanding of both. You’re not going to get a full education of feminism in this book, but you’ll have a better understanding of the need for it.

Check it out on Goodreads